The news at the dentist is not good.

Well, it’s probably pretty much OK for him, but not me, his long-time customer/client/patient/whatever.

What smug presumption had led me to believe would be a replaced filling worth a few hundred dollars turns out to be crown work going way over a grand.

This rather wipes out the satisfaction of hearing, later in the day, exactly how much the taxman is going to reimburse me this year.

Turns out my dentist is going to get more than half of it.

So it goes … what to do when in the CBD and needing a few rough edges finessed off the day?

Before the advent of Bennie, I worked in or near the CBD for 20 years or so, even living in Flinders Lane for a couple.

Even since the move way out west, we made frequent CBD trips for wing chun and other adventures and chores. The martial arts logistics are beyond us, for the time being, so a city visit has become something of a novelty.

In my CBD years, Kuni’s was a favourite and a regular. I hit it for lunch often, and sometimes two or more times a week. It’s an old campaigner in terms of Chinatown in general and CBD Japanese eateries in particular, though it never seems get the same reverential press as the likes of Kenzan and Hanabishi.

On those working week lunches so long ago I almost always made a point of being on my ownsome, with a book or newspapers for company, as I sat at one of the stools at Kuni’s sushi bar.

I was on nodding familiarity with a number of other regulars who adhered to the same routine as I. There seemed to be a sort of unspoken expectation that this was our own individual hideaway and secret. A refuge, if you like, wherein conversation was to be discouraged.

The sushi bar at Kuni’s – sigh! – is where I head to sup and sip the devastating dentist visit out of mind, body and soul, with a copy of hot-off-presses GRAM Magazine for reading purposes.

LIke many other Melbourne stalwarts, not much has changed at Kuni’s over the years, though some remodelling has seen those stools have been replaced by ordinary chairs.

And the prices have crept up, of course. The daily bento is $19. Teishoku dishes such as wafu steak or sukiyaki with rice and miso soup are all $20 or more. Yakisoba noodles are $16 and most of the various sushi/sashimi combos at or around the $30 mark.

There’s cheaper Japanese places in the vicinity, but there’s a sure pleasure to be had at chowing down in a real dinkum bona fide Japanese restaurant.

So much so I am happy to pay $18 for the vegetable set, enjoy every bite and sip and consider it money very well spent, even if just for old time’s sake and assured banishment of the Dentistry Blues.

The miso soup is good, the right temperature and studded with tiny cubes of tofu, though lacking seaweed or mushrooms.

The tempura I eat first while it’s hot and crispy. It’s very good and made up of a piece apiece of pumpkin, potato, carrot, green bean and capsicum.

The agedashi tofu is beaut, the two still-crunchy chubby chunks of silken tofu swimming in a broth of dashi and mirin and topped with a sludge of finely grated daikon and also ginger. Quite refined and mild of flavour, I love it.

The sesame spinach is just OK, its coldness lending it a clamminess that seems out of step with the other, fine dishes.

My three pieces of cucumber-stuffed hosomaki sushi are fine, and have a little mound of pickled ginger for company.

A bowl of rice, which as per usual I only nibble at, and that’s it.

It’s been a delight to revisit an old friend and find that some things never, or hardly ever, change.

Crown work clocking in at $1200 or more? I’ll worry about that in a few weeks’ time! 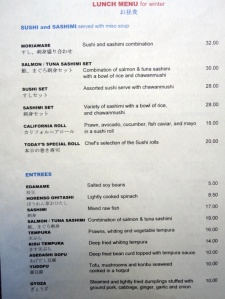 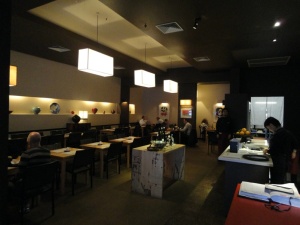