Exchanging dough for baked dough at Gerry’s Pittes – “First & best in Australia since 1969” – is an odd experience even by the sometimes quirky standards of the western suburbs.

I’ve been alerted to Gerry’s and the wisdom of investing in some of his bread, by Consider The Sauce friend Rich, who wrote:

Ever done fresh Gerry’s Pittas from the factory/shop front in South Road, Braybrook? Just down from that Viet place (Quan Viet) you covered a little while back. $7ish for a fresh bag of 20! Awesome for pizzas and brilliant with a lil’ butter and pan fried for a minute, a tiny squeeze of lemon goes well too. They’re open early till about 3 or so during the week … I know its a lot but thing is you can freeze ’em and they still come up well after 20 secs in the micro. They freeze well for me … but @ $7 for a bag of 20 … and the fact they have made me salivate in a ridiculous manner for many years – it’s worth the gamble.

Suzy, another Consider The Sauce buddy, chimed in, too:

You should check out Gerry’s Pitas in the same strip. Ring the bell to buy direct best Greek pitas going.

So here I am, standing in front of a plain, unwindowed shopfront in Braybrook.

I do as the signage instructs me and depress the busted-up bell.

A minute or so later the door is opened by a flour-dusted bloke who utters a few words in Greek to me then inquires in English what it is I want.

“I want some pita bread.”

The doors closes, preventing me from inhaling any more the of delicious baking aroma coming from inside or trying to get peek of the operation, leaving me somewhat bemused.

Have I ever gazed upon a flour-stained footpath before?

I don’t think so.

A few minutes later, the bloke is back.

He takes my money, gives me my bread and makes change.

Surely, since this operation has been in operation since 1969, this guy is too young to be Gerry?

“No – I’m the supervisor,” he says before briskly consenting to having his photo taken and closing the door once more.

This transaction has been singularly lacking the sort of warmth I value so much, but that’s kind of neat in its own way. 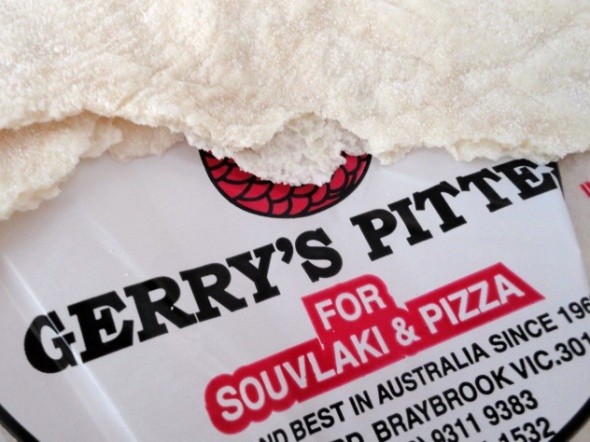 If or when you ever have a late-night kebab from one of the kebab shacks/caravans, I reckon there’s a pretty good chance this is where its wrapping will have come from.

But saying that seems like doing these breads something of a disservice.

The freshness is the thing.

My breads are still warm when I get them home a few hours later, and when opened the bag emits a tantalising reminder of the previously enjoyed bakery aroma.

It’s a lot heavier than Lebanese-style pita. Eating one straight out of the bag is quite a lot like eating ordinary bread.

This is certainly value for money, with half of them going straight into the freezer.

I like Rich’s idea of giving them the frypan treatment. That’ll go sensationally well with the Greek salads that are among our favourite meals.

And with quite a hefty density, I can see them standing in for the supermarket rotis, parathas and naans we’ve been seriously unimpressed by whenever we’ve tried them.

One’ll get a test run with tonight’s dal.

And I know Bennie will love them a whole lot more for school lunches than the breads and rolls that have been our routine to this point in time.