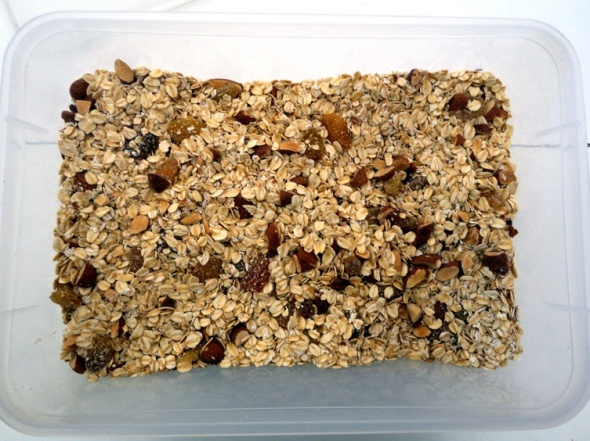 With some variations along the way due to taste, immediate availability and cost, this is the basic mix I have been using for more than three years now.

I haven’t done the sums, but I simply assume it’s a helluva lot cheaper than buying even standard supermarket mixes – never mind the ultra-pricey lines that generally come packaged in cellophane!

Equally important as price is the fact that I get to have breakfast fare that is constructed precisely to my own tastes and is absent sugar and dodgy ingredients.

(I almost always get my fruit and nuts from self-serve style Sunshine Fresh Food Market, as I can then suit myself as to the exact quantities.) 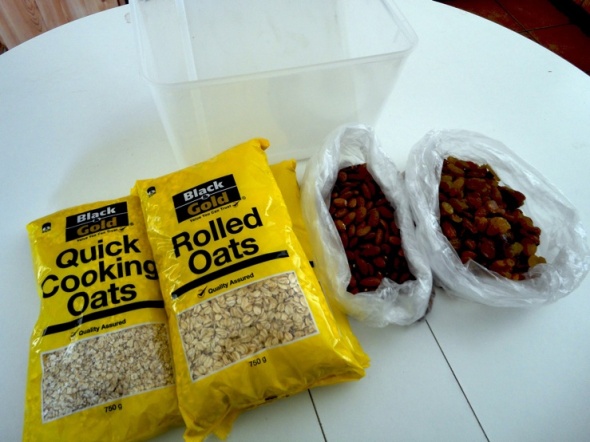 The bigger the container the easier the mixing!

Throw in the rolled oats and then the white sultanas. 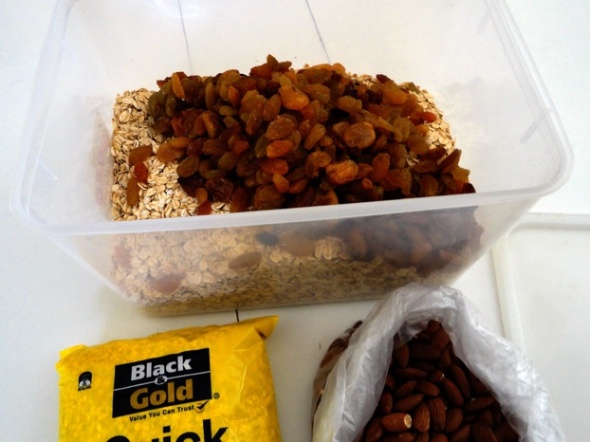 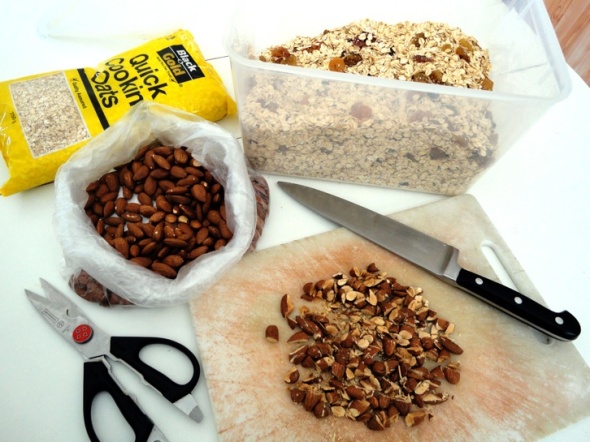 Finally, add the crushed oats and mix well – and carefully, especially if your container only just holds the amount of muesli being made! 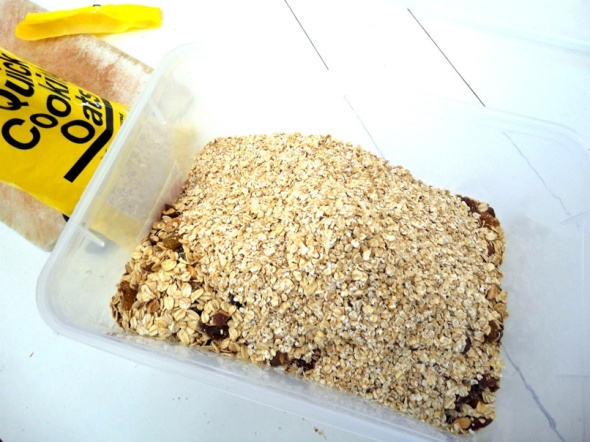 This is obviously a very personal choice and quite a hardcore mix – those looking to ween their kids of sugary, packaged cereals can try any number of variations.

All and any kind of dried fruit, for instance, though cast around for options beyond sultanas, raisins and currants and you’ll be up for more chopping time.

Also, I can’t imagine eating this mix freshly added to a bowl with milk in the morning.

I soak it overnight in quite a lot milk so it doesn’t end up too claggy and too much like hard work.

And always with fresh fruit – lovely stone fruit at the moment – and yogurt.

I have a friend who doesn’t soak hers, but roasts it, so I guess it’s more like granola. But then, she doesn’t chop her almonds either so she is a little strange on it.

I have another pal who soaks his muesli mix in orange juice – another weirdo!

I could save money by buying unroasted almonds, but I like the crunch.

Depending on taste and budget, you can go a lot further, of course.

When I worked at Neal’s Yard Wholefood Warehouse in Covent Garden in the late ’70s, we made up a huge batch of muesli every week.

Into it went not just oat flakes but also rye, wheat and barley.

Not just almonds, but also brazil and cashew nuts.

It was truly the Rolls Royce of mueslis and flew off the shelves.

But I like my mix just the way it is – I especially dig the white sultanas.

So juicy and sweet!

But I’ve probably put Bennie off them for life by once describing them as being like “big, fat white maggots”!

(That’s quite possibly me pouring honey in the attached Neal Yard link!)