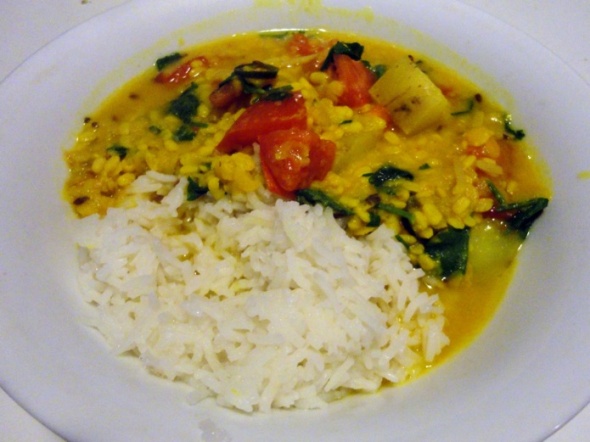 I learned this style of dal cooking from Yamua Devi’s book, The Art of Indian Vegetarian Cooking.

Instead, many of the dishes use chillis, ginger, lemon juice and coriander. 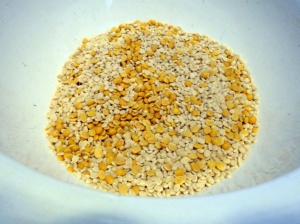 Unless using red lentils or moong dal, soak pulses overnight or at least for the best part of a day. In this case I use channa dal and urad dal because that’s what I have most of on hand.

But I find if I don’t add it to my Indian cooking, it just doesn’t have anything resembling the sort of authentic Indian flavour I seek. Moderation is the key – in this case I use a teaspoon of salt. I suspect an Indian restaurant or household may’ve used 3-4 teaspoons!

Give the salt a miss and you’ll end up with a tasty meal that is of vegetarian nature rather than Indian. And that’s fine, too! 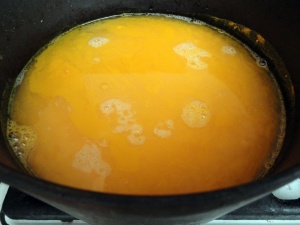 Cover with plenty of water, bring to boil and cook on low heat until pulses collapse into a near-mush.

It’s important at all stages to keep the water content very high – in fact, higher than you may think wise.

When served, dal always coagulates on the plate or in the bowl.

It it’s too thick in the pot, it’ll become an unseemly stodge when served.

So keep it really runny! 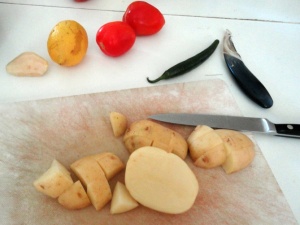 Meanwhile, dice the spuds into smallish bite-sized chunks and add to the dal about halfway through its cooking process.

You can keep the dal as a pristine dish if you’re cooking a proper Indian meal with other dishes.

But often we find adding spuds or carrots makes for an easier, quick-cook all-in-one meal.

Don’t worry about the spuds being overcooked – if they collapse a bit, it just adds to the texture. A bit like the spuds in beef rendang and the like.

As the dal mix becomes thoroughly cooked, slice the chilli, grate or chop the ginger/galangal and chop the tomatoes.

Sometimes I finely grate the ginger, but more recently I’ve taken to taking the time to slice it into thin strands.

This delivers more of surprising flavour hit and is inspired by the profoundly gingery dal I had at Maurya in Sunshine.

About this time, it’s a good idea to lower the heat under the dal mix even further if possible or take off the heat entirely.

Especially if you’re using gas, it doesn’t take much of a flame to have the pulses sticking to the bottom of the pot.

Throw in 1 teaspoon of cumin seeds and fry until fragrant.

Lower the heat a little and throw in the sliced chilli and ginger. 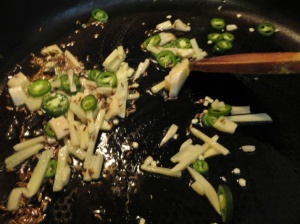 Throw in the chopped tomatoes.

Stir and cook until the tomato pieces are just starting to break down but still holding their shape. 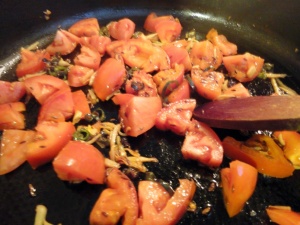 Throw tomato/ginger/chilli/cumin mix into the pot of dal.

Stir and let cook for five minutes or so until the flavours are emancipated.

When ready to serve and eat, throw in the coriander and, finally, squeeze in juice of a lemon.

We try to get small bunches of coriander and use the whole lot in one bang – stalks and all. It doesn’t keep very well.

Serve with rice, raita and your choice of breads and side dishes.