Soul food was originally a term used to describe Afro-American food of quite a wide range cooked and eaten in the southern parts of the US, although given the migratory patterns of last century it’s easily found on both coasts and elsewhere as well.

Soul food, though, is also a perfect description for Cafe Sarabella – not just the delicious food, but also the cafe itself and the warmly welcoming vibe.

It’s situated in Victoria St Mall, which is a lively and lived-in community space.

About half the outdoor tables and chairs seem to be the territory of the various food joints that line the mall, the rest public and communal.

There’s cafes, a couple of hot looking falafel joints, a deli and more.

Every time I’ve been there the mall is chockers with locals of a dizzy range of ages, styles and national origins hanging out, often over coffee.

Cafe Sarabella – it’s named after a mother and daughter team – has been open for about seven years and serves terrific Indian food and a more.

There’s lamb dishes of Persian and Moroccan derivation, for instance, and a chicken laksa. You can get a masala dosa, too.

It’s a tiny, homely space, with seating for maybe half a dozen inside and two small outside tables.

There’s nothing small about the big-hearted and friendly service, though.

Sara, who originally hails from Kerala, runs Indian cooking classes on one Sunday a month for $75 a head.

She tells me that much of her food is made using fresh vegetables provided by her customers, so much of it is organic. In return, she either pays them or feeds them!

One such customer-inclined item is the incredible feijoa, cumquat and tomato chutney that accompanies my vegetable thali ($10.50).

The rest of my plate’s contents are just as fine …

Two vegetable curries, one with radish, carrots and zucchini, the other with baby carrots and green beans.

Plain yet perfect yellow dal atop the rice.

The surprise is provided by melt-in-your-mouth silky tofu pieces perfectly matched with a spiced tomatoey gravy.

While many of the curries and other dishes listed on the blackboard menu are priced as main courses, Sara tells me she’s happy to assemble combo-style thali meals to suit.

Given the hefty customer input and the consequent seasonal aspect of the food here, I suspect there’s many a surprise to be had by regular visitors.

As we’re talking, she lets me try a mouthful of spud from the lamb and potato curry sitting atop the stove – it’s amazing!

But the most appealing thing about Cafe Sarabella is that it serves pure-bred home-cooked Indian food – so different from the often tasty but overly buttery, salty and rich fare served up by so many of our Indian restaurants.

There’s no fried food here – even the samosas are baked.

The Quince Poacher, a Coburg local, is a fan, too – read review here. 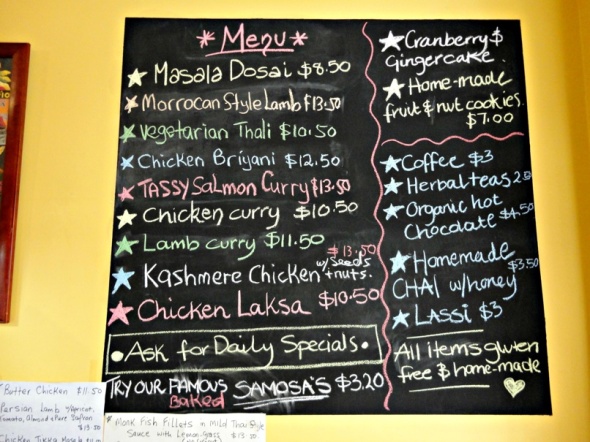