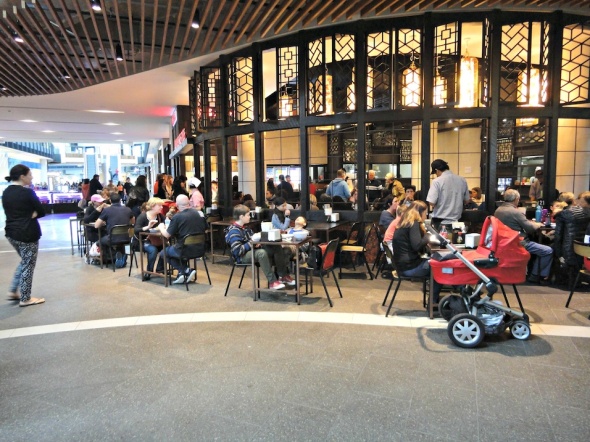 It’s only a shopping centre, but Highpoint has its strengths.

Today one of them becomes very apparent to me.

I am wrangling two lively boys for the next six hours or so, and the weather radar tells me the likes of fresh-air frolics at Point Cook Homestead or Altona Beach are simply not going to be workable let alone enjoyable.

So off we go to the Great Maribyrnong Retail Shrine On The Hill – where there may be a school holiday cast of thousands but where we will be dry and warm.

Some fruit & veg shopping, checking out the book and games shops, lunch at Dumplings Plus … a perfectly acceptable and pleasurable way to fill a few hours.

Since our first visit, we’ve being hearing mixed reports about the new dumpling joint in the new food court section of the centre.

Truth is, we’ve had a few ups and downs ourselves.

We earnestly suggest, for instance, that if you’re looking for laksa that you’d be well advised to look elsewhere.

Nevertheless, Bennie and I have lucked upon some fine dishes on separate visits – me, solo, and beef brisket soup; Bennie with his mum and their dumplings with chilli.

So we’re intent on trying both again and comparing notes in the company of Bennie’s school buddy.

My earlier encounter with beef brisket soup ($9.80) had involved an incredibly deeply and lustily flavoured broth and heaps of dark, well-cooked and virtually fat-free meat.

Today’s outing seems rather anemic by comparison but is still quite respectable.

So it goes with dishes – bo kho is another – that vary depending on the freshness or otherwise of a particular batch. And with freshness not always being a good thing.

Our dozen steamed dumplings ($9.80) come as half pork, half vegetable, not that we can tell the difference – it’s a lottery!

But both kinds are good in a chewy, rustic way.

I am bemused, though, by the sauce in which they swim.

This seems way more about soy and hardly at all about chilli, with only the mildest of spice kicks detectable on about every third mouthful.

So even on a good day, it seems, Highpoint’s Dumplings Plus can be a hit and miss proposition.

But it’s still, for us, the best eats to be had there.

Although we are aware that for many folks, that’s no sort of marker at all.

As we arrived and ordered at the front counter, a group of three women were “reserving” a table each as they awaited friends.

When we left a half an hour later – and having eaten our lunch with three of us crammed onto one of the tiny, exterior two-seater tables – only one of their pals had arrived and they appeared to be a long way short of ordering, never mind actually eating.

At such a popular eating spot with no lack of customers and extremely high turnover, this seems a bit rich.

4 thoughts on “Best food at Highpoint? We think so …”