Cecil is the pastor who keeps an eye on Bennie’s school in north Sunshine.

Having known him for several years, enjoyed his company on quite a few occasions and even having sought his advice and counsel on various issues, I consider him a really cool cat.

Even if he does wear red socks with sandals in summer while out and about on his bicycle.

So it seems seriously remiss of me that until today I’ve never gotten around to visiting his Barkly Street church for a service or any other purpose – especially as Bennie and his mum, Deb, have been regulars for some time.

As it turns out, I could hardly have chosen a better day to show my face – today St Matthew’s is joining other Lutheran churches around the country for a proverbial long lunch.

I have an exceedingly grand time – and the food, as good as it is, is just part of the pleasure.

Even more important, there’s an all-embracing community vibe that lives and breathes inclusiveness.

So not only do I get to hang out with Bennie, Deb, Pastor Cecil and his lovely wife, Jane, and Tom, Bennie’s school principal, I mix it with a whole bunch of people. 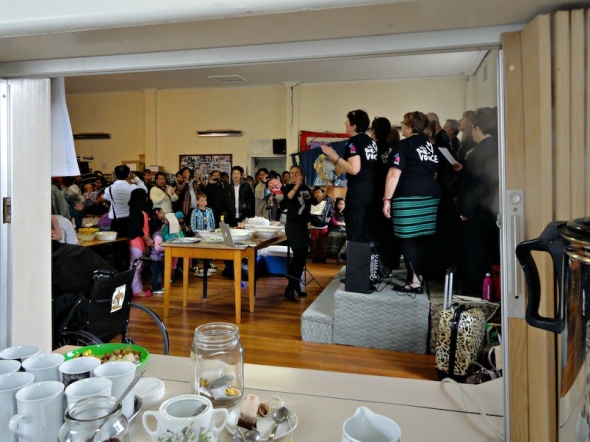 Heavily represented among the gathering of several hundred are many members of the Mara people from Burma. They share an evolving “fellowship” and church premises with the St Matthew’s congregation.

Sprinkled through the assembled masses are representatives of the Filipino, Sudanese and Ethiopian communities, along with many older folks and many, many youngsters of all stripes – some of whom aren’t even playing games on mobile devices.

For food, there’s a whole pig and a whole lamb being spit-roasted and dismembered, along with all sorts of salads and curries – and even some regulation snags in bread.

I make happy with samples of a couple of the chook curries and more of the pork than I should. It’s simple, delicious and seems to have a whiff of ginger about it. It goes swell with the beetroot salad I spy on my second go round and a sublime potato salad.

Bennie does much as I do, though Deb is effusive in her praise of an old-school curried rice salad she has happened upon.

Then out come the cakes – including a rendition of our fave deep dark chocolate cake that Bennie has knocked out this very morning unaided by any parental supervision whatsoever.

Jane wheels out a candle-laden hazelnut number from Hausfrau in celebration of her hubby’s birthday.

Everyone in the dwindling crowd happily sings Happy Birthday.

In a world in which the Uniting Church has been in the news for flogging off many churches across Victoria, devastating the communities involved, and in which the mega-churches seem to offer something of a worship equivalent of shopping centres, I worry about the future of such an enterprise as St Matthew’s.

So I talk to Simon, who happens to be chairman of Bennie’s school and is also involved in future planning for St Matthew’s.

He tells me that while the church is facing issues – among them, the property needs a comprehensive overhaul and Pastor Cecil will be retiring in a few years – the future is nevertheless secure.

Part of that is being under the umbrella of greater Lutheran family, and part of it, too, no doubt is the freehold nature of the land ownership.

But equally, the soul of the place would seem to admit no other option but continuing on.

One thing’s for sure – I shouldn’t let myself be such a stranger in future.

Thanks for having me! 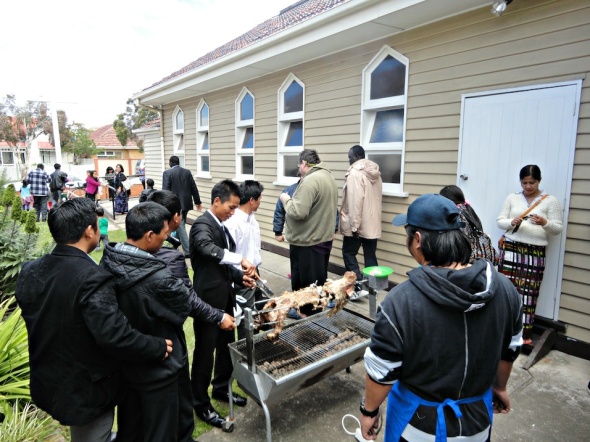 2 thoughts on “Community glue in WeFo”