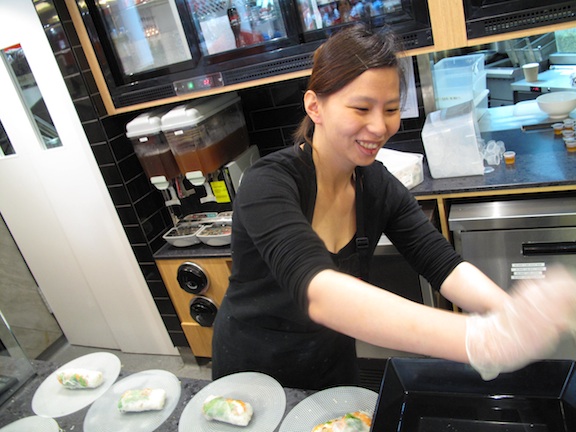 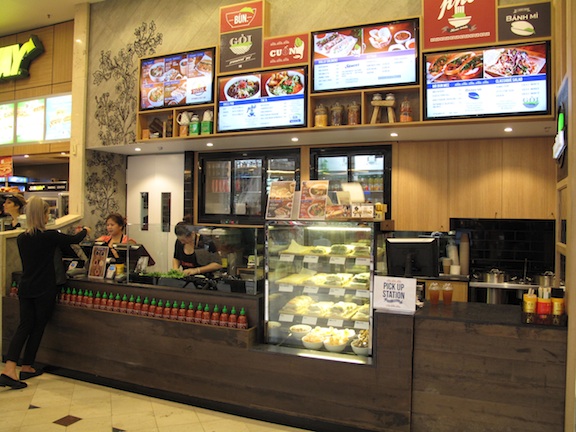 We’ve only observed the unrolling of the Roll’d phenomena through the media, but it’s been easy to be impressed.

Here’s some brilliant entrepreneurial spirit at work packaging genuine Vietnamese tucker into the template of the sort of franchise concept that is proving good food and fast food don’t have to be mutually exclusive.

But now there’s a branch office installed in one of the Highpoint food courts, the matter is no longer an abstraction.

We approach with an open mind but resolve to cut this mob absolutely no slack whatsoever when drawing comparisons with what’s available on the real Vietnamese streets of Footscray or Sunshine. 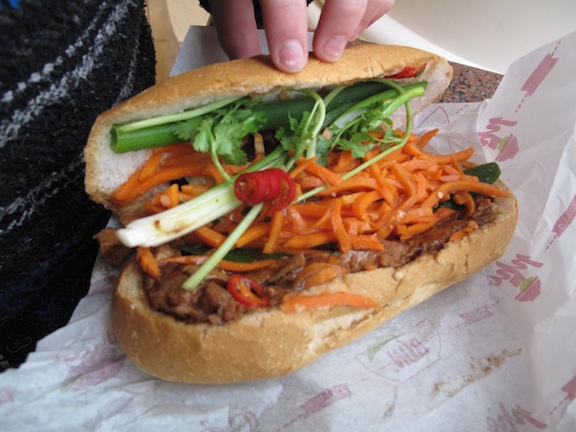 THE HALF EMPTY VIEW

All the implements and containers – chopsticks, spoons, bowl, mug, sauce tubs and (of course) the serviettes – are disposable.

There’s not a thing that’s reusable about our lunches.

The bread roll used in creating Bennie’s banh mi is OK but also a tad on the doughy and squishy side.

It’s not crusty like a banh mi roll should be.

It more resembles the sort of bread rolls served up by the Subway branch right next door.

What’s more, had it been purchased on its own, it would’ve cost us $7.20 – in other words, about twice the amount the same order would cost in ‘Scray central.

The meat in my pho is drab and there’s no accompanying plate of bean sprouts and herbs, while the dish as a whole lacks zing.

THE HALF FULL VIEW

On the other hand … the proof here is in the seeing, smelling and tasting.

This is real-deal banh mi of surprisingly high quality – and the uncrusty bread and price be damned.

The same goes, with somewhat lesser impact, with my pho.

Most importantly, the broth is dinkum although a little on the sweetish side for me.

But nevertheless, this really is pho – albeit at the average-tending-to-medicore end of the pho scale.

And at $9.90, it’s priced somewhat closer to ‘Scray than Bennie’s banh mi.

Bennie’s mug of pho is of a pretty decent size for soup that’s part of a combo deal.

It’s all about perspective, about – literally – where you’re coming from.

In this instance, we headed to Highpoint specifically to eat at Roll’d.

We’ll not be doing so again.

Why would we, when the same food done so much better and cheaper is easily available?

Ahhh, but if we happen to be at Highpoint on other business and food is desired … we’ll be happy to sup at Roll’d once more.

Because it’s better than everything else that surrounds it in the shopping centre’s “atrium” food court and is right up there with Dumplings Plus as the best available at Highpoint in general.

The full Roll’d menu and pricing can be viewed at both the company’s website and Facebook page. 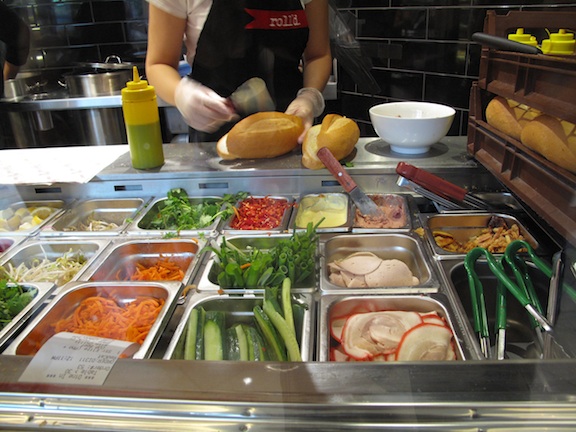 8 thoughts on “Getting Roll’d at Highpoint”