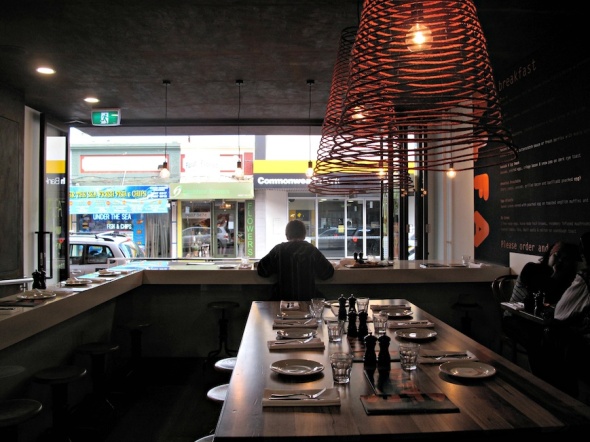 The weight of opinion would seem to be overwhelming.

It doesn’t take a lot of looking to find accolades for the coffee served at Yarraville stalwart Alpha Bakehouse.

As well, hordes of commuters get their “roadies” here despite there now being two alternatives that are actually closer to the station.

In my city commute days, I did likewise – but always found the coffee mediocre. But as I say, I am in the minority.

More broadly, we have never really warmed to Alpha. The occasional pie, but that’s about it.

Besides, at lunchtime, the place is so very, very busy.

Again, we are in the minority.

We’ve been aware for a while the place is now open for dinner – and are open-minded enough to give it a go.

What we find and are provided makes us converts.

The joint’s daytime role as a bakery/cafe/sandwich place remains apparent at night.

But the Alpha crew has otherwise done a fine job of fostering a real restaurant ambiance.

In the long room, there are many small tables, a larger one of the communal variety and a broad bench at the front.

Wowee – all are set with real-deal napkins! We appreciate that.

We lover our pozzie at the front bench. It’s a fine place to await our meals on a balmy Indian summer’s eve as we watch the commuters heading home in an endless parade.

The Alpha’s dinner mains mostly range through the $15 to $25 mark and can be described as being in the family bistro or local pub tradition (see menu below).

For once, I pull parental rank on Bennie and choose the “Alpha wagyu burger” ($18).

It’s good, with a nice, hefty patty that perhaps – by our usual standards – could use a bit more zing in the seasoning department.

The bun is excellent, and the greenery and tomato are respectively crisp and fresh.

A nice, crisp slice of bacon would have been appreciated, though.

The chunky “hand-cut” chips are beaut, and I even like them dipped in the generic tomato sauce.

As luck would have it, Bennie’s meal trumps mine – ironic, given his chicken parma ($18) is what I would have ended up with had he been allowed his burger druthers.

As he motors though his dinner, I venture that it is probably the best parma he’s ever had.

He nods in the affirmative.

Based on my sample taste, I reckon it’d be in the vicinity of that category for myself.

It’s really good. And the meat is served mostly beside – rather than on – the chips. Hurrah!

The parma itself is fine, non-reconstituted chook.

Even better, the topping provides a beautifully finessed harmony between cheese, ham, tomato and sage – something that is, in our experience, far from common.

His chips are the same good deal as mine, while his salad is way better than the mere garnish that has attended my own burger plate.

Alpha’s dinner offerings are unlikely to become regulars for us, but we love that it’s there – based on our two meals, Alpha is a classy, viable alternative to similar offerings nearby.

And the early-evening service has been attentive and friendly.

6 thoughts on “Dinner delight in Yarraville”