Wayo is not one of your more formal Japanese restaurants; nor is it your quickie purveyor of sushi rolls, though there are those available.

So … Wayo IS a rather elegant cafe-style eatery.

And on the basis of a second visit – see a story about the first here – it’s doing truly superb things.

This time around, four dishes are selected from the entree-sharing list.

This simple, affordable Japanese-style tapas spread is truly memorable, each and every dish an outright winner. 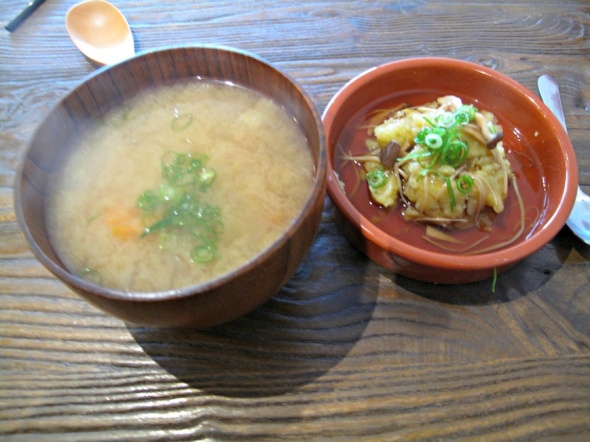 And there’s a goodly bunch of onion, carrot and potato in there.

“Hearty” is certainly the operative word.

We’re well used to Japanese potato salad being more like mashed spuds in the style also found accompanying BBQ in the US.

Such is the case with this “potato salad with Japanese gravy” ($5.50).

But the flavour is fabulous – surely there is a strong cooked-in-stock thing going on here.

Not sure about the clear “gravy” – is it a glaze or is it merely an oil slick?

No matter – we love this, too.

Instead of a halved baby eggplant, this version consists of a thick slice of regular eggplant. The skin has separated from the flesh and gained a brittleness that makes it almost seem like a bottomless bowl.

Is it meant to be eaten? It tastes OK, with smoky flavour, but is a little weird.

But the flesh itself and the gooey miso sauce are sublime – so silky and delicious. 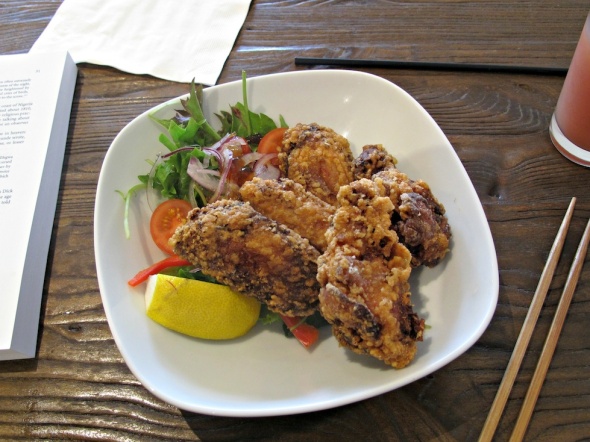 “Tirikara fried chicken” (five pieces for $7.50) is made of ribs or ribettes rather the advertised fully-fldged wings – but that’s not necessarily a bad thing.

In any case, the price is still right for the simple reason they taste sooooo good – dry of batter with, I think, a strong garlic flavour.

Based on this rather randomly selected array of dishes, we’re definitely up for return visits to Wayo.