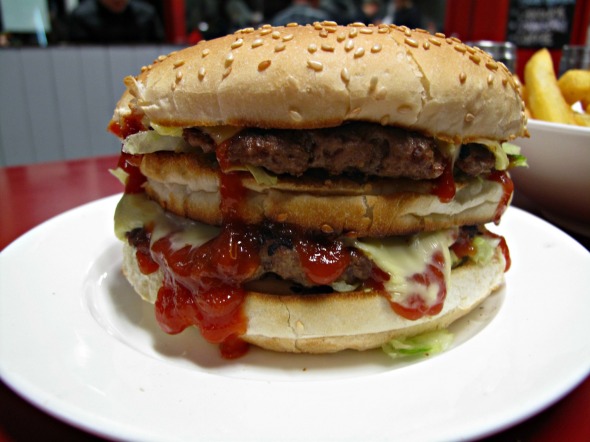 It was a thrill to see a jazzman of such stature, someone who has been reaching for sky (and God) for a long time, and even Bennie was impressed.

It was, however, something of a perfunctory show with plenty of empty seats, especially of the pricier variety right in front of the band (ours, the next price tier down, were off to one side but superb).

Perhaps, even with an artist of such calibre, two shows a night for five nights is stretching it – even in a great jazz city such as Melbourne.

In any case, our show was the late one and now we’re out and about on a Saturday night and the obvious question arises.

Bennie nods his head in an eager agreement.

So we head to one of Melbourne’s famed late-night spots – Danny’s Burgers in Fitzroy North.

I’ve been known to hit Danny’s every year or so when the late-night munchies strike.

Tonight, about 12.30am, it’s busy without being crazy, either in terms of patron numbers or their demeanour.

After we’ve ordered, Bennie tells me he, too, has been here – though I have no recollection of such a visit.

Invariably, I’ve found to food to be adequate here – good for filler but not something I’d pursue in more normal hours.

This time, we do much better.

Perhaps, as Bennie opines, the difference is the inclusion of pickles – but these really are fine burgers.

The beef seems more beefy than that I recall from previous visits.

The overall vibe of our burgers is unusually and enjoyably somewhere between the Aussie-style outings I’ve had here in the past and the more Merican-style of the many new-wave burger places around town.

I’m not sure what the “special” sauce entails, though it does seem to be not-your-standard-tomato sauce.

The chips here are always excellent.

Burgers, chips, two cans of fizz and we’re out of there after grabbing some spare change from $30.