After spending several hours with my friend, the Uber Food Dude, cruising the inner west and making deliveries, and talking with a handy cross-section of restaurant folks along the way, one thing is clear.

They may not like giving Uber a hefty slice of the price of each meal dispatched – my understanding is that, under current arrangements, Uber takes 35 per cent of each meal’s cover price.

But despite that, they all expressed – to one degree or another – enthusiasm for being involved with the service.

No need to hire drivers.

A weekly deposit in their business bank account – guaranteed, even if not, um, delivering the full take of eat-in meals.

And – very importantly, going by the feedback I get – promotional value and the exposure via the Uber Eats app.

Uber takes the photos that go with every eater entry on the app – and they are very good. 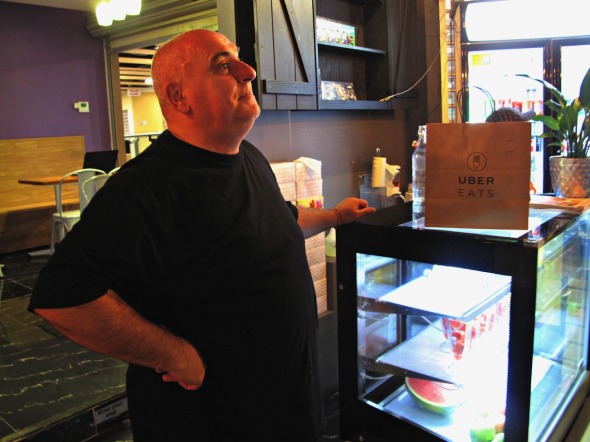 Vince at Issan Thai Street Food about to see another Uber order go out the door.

My Uber Eats driver pal had previously regaled me with stories and explanations of how it all works, including the very slick technology that makes it possible.

Disappointingly, for the tabloidish story-seeking journo that resides within in me, there has been little by way of outrageous yarns arising from his regular delivery routine.

I think everyone understands that such an operation runs on very tight margins – just like the restaurant game itself.

But still, something doesn’t quite sense for me in all this.

How is it viable?

When Uber takes a hefty slice and the drivers get something like $8 to $12 for each delivery?

At Luxsmith in Seddon, we’re told it’s their first night doing Uber – and early in the evening, they’re already seen more than a dozen orders go out the door.

The recipient of our Luxsmith delivery, for whom this is also an Uber debut, certainly seems happy!

There are idiosyncrasies in the ordering habits of inner-west Uber Eats users.

One of our deliveries, for instance, finds us taking a burger meal from Mr Burger at Yarraville Gardens to Edgewater – and only a couple of blocks from St Burgs.

Later in the night, my pal makes the journey from Happy Four in Yarraville to a part of Footscray where the are a couple of perfectly fine and very similar Chinese establishments.

For my friend, doing Uber Eats makes all kinds of sense.

The money may not be of the get-rich-quick variety, but a handful of deliveries a night for a couple of nights a week adds up to some handy income.

Unlike the Uber passenger service, there are no members of the public with which to deal – just happy, and hungry, customers.

As well, deliveries are – thanks to the Uber driver app “ping” alerts to drivers in any given location – almost always very local and rarely more than a few kilometres.

He reports that some of the most frequently used inner-west restaurants for Uber deliveries are several that may appear to not be particularly popular – but they come alive when the hungry sofa corps get on their mobiles, especially later at night!

In my eats journeys in recent months, I’ve become increasingly familiar with the sight of Uber deliveries lined up, and waiting to be picked up, at many of the places we have been chowing down.

2 thoughts on “The secret life of an Uber Food Dude”