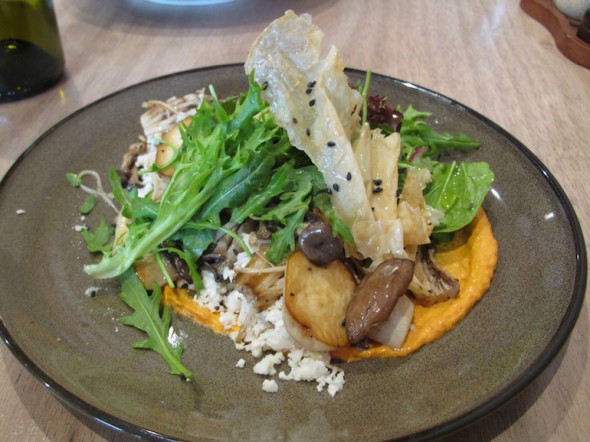 It goes – sometimes, but not always – with chefs opting out of the rat race of high-falutin’ dining for a more manageable lifestyle.

Punters may have to sleuth among the eggs a gazillion ways and smashed avo, but the effort is often worth it.

We had some grand luck in this regard recently at Small Graces in Footscray.

Well, truth be told it had somewhat moved out of our radar coverage since our initial review soon after its opening.

But in one of the wonderful ways in which social media – often maligned – can enhance our lives, I became a while back FB buddies with one of Jack B. Nimble crew.

Consequently, I was entranced by the photos she was posting of the dishes being created there.

“Hmmm,” thought I. “That looks fabulous.”

So Bennie and I did just that.

My choice (top photo) – and, yes, it was one of the photos I’d seen on FB as posted by Jack B. Nimble chef Deb – is a medley of mushrooms on cauliflower rice with grilled pepper romesco, sesame, spiced pepitas and soy bean crisp ($17).

Forget the vegan nature of the dish, the price tag and the cafe setting – this is amazing.

The cauliflower rice – made, I’m told, by simply whizzing some raw cauliflower and tempering it with some sugar and salt – is a fabulous bed for the various fungi.

And the mushies – including what look like discs of spud in the photo and on the plate – are superb, mostly still firm, lightly fried, full of flavour.

Deb tells me that “sesame oil makes anything taste good” – but I’m not buying it.

Some fine greens and just the right amount of that romesco sauce complete the picture of fantastic dish. 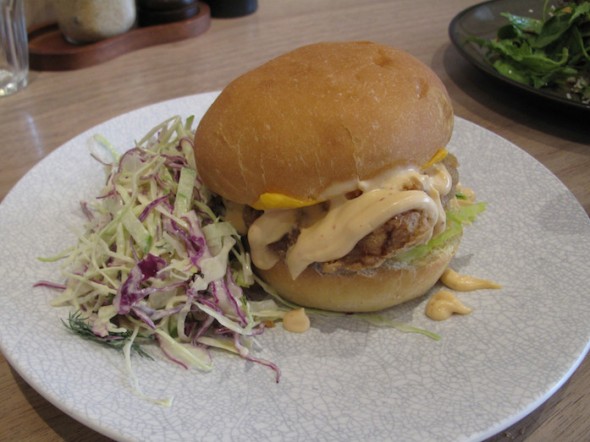 It’s served on non-brioche roll – I can hear the cheers about that from some quarters.

The chicken is well fried and accompanied by chipotle aioli, cheese, lettuce and tomato.

On the side is fine slaw – something we always appreciate.

Deb tells me the Jack B. Nimble menu is destined for a soon-come spring freshen-up.

But almost certainly the mushroom medley will remain – after all, it is her mum’s fave dish on the menu.

One thought on “Amazing vegan”