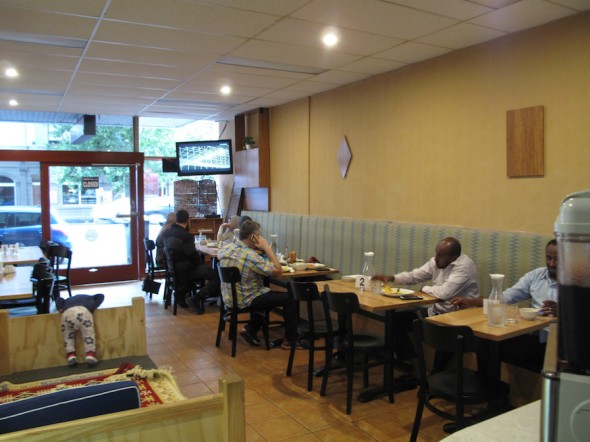 Eating at Somalian restaurants involves a similar dynamic to chowing down at, say, the Vietnamese eateries of Footscray or St Albans.

Many places have similar – even identical – menus.

But within those parameters, there can be wonderful worlds of variation and subtle differences.

For instance, the complementary soup at House of Mandi enjoyed at the first of two CTS visits is quite different from those offered elsewhere on Racecourse Road.

Instead of a mostly clear and tangy lamb broth, here is served a slightly thicker brew, stuffed with not just the expected carrot but also peas and corn, and seasoned – I’m guessing – with a good curry powder.

Different – but just as good.

House of Mandi has been running for about a year and is under the guiding hand of two husband-and-wife teams – Abdirahman Abdi and Fatuma Yussuf (above), and Yusuf Rabi and Amina Sirat.

The plain facade (see photo at bottom of story) belies the rather nicely elegant interior and friendly vibe inside.

Those subtle differences come to the fore with this marvellous meal in the “federation” style.

The name is a holdover from colonial days and, in the food sense, means the combination of both pasta and rice.

Here, the rice is laced through with carrot strands and studded with sultanas and whole chick peas.

The basto is cooked in a typically post-al dente fashion and served with a dryish tomato sauce with some minced meat on board.

The lamb shank looks rather unlovely, but who cares when the meat is so tasty and succulent?

Spiced yogurt and a fiery green chilli sauce are served on the side.

Lamb shanks, of course, long ago left the realms of cheap cuts and quite often, in other places and contexts, can be quite expensive these days.

So that makes this shank offering an outright bargain at $15. 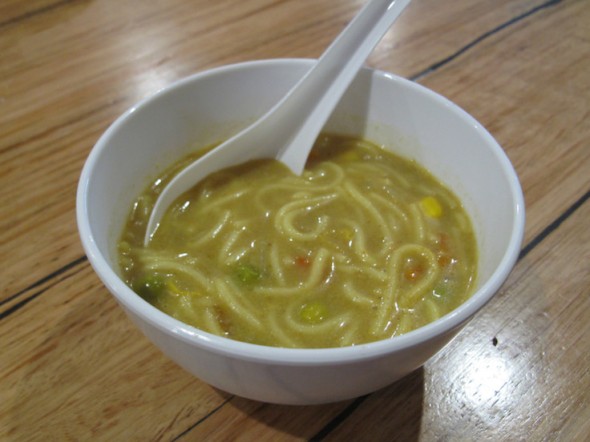 For the subsequent CTS House of Mandi outing, this time with the ever excellent company of Nat Stockley, the soup is just a good – but this time comes with noodles.

We both opt for the non-shank lamb-on-the-bone in federation style, Nat with just mandi rice, me with mandi rice and pasta.

Mandi, I’m told, is a Yemeni word meaning juice that in the rice context refers to the meat being placed on the rice as it cooks and the juices seeping down and through.

Truth be told, there’s little evidence of that here – but the vibrant yellow rice is still Somalian wonderful, with subtle perfuming.

How wonderful is Somalian food when rice can be served in two such different yet equally toothsome ways?

This sort of lamb is very familiar to CTS, but I’m never sure quite what precise nature it is going display.

Here it is well cooked, some fall apart tender, some not-so-much, but all displaying yumminess of a high order.

There’s even a couple of ribs in there.

Following in the footsteps of shanks, lamb ribs have themselves become trendy in some quarters and, thus, correspondingly expensive.

So, once again (familiar refrain), our meals are sooper dooper bargains at $15.

There’s pan-fried veg under that meat to help liven our meals up even more, along with the familiar yogurt/chilli sauces and a good salad.

(There’s no photograph of the latter – they all turned out blurry; bad food blogger!)

19 thoughts on “House of Delicious”