A funeral, a priest, a church, an olive tree, senior citizens on the street or tending their gardens, products on the shelves of IGA in Yarraville or Sims in WeFo …

For newly arrived residents or casual visitors, the Greek heritage of the inner west – particularly in Seddon and Yarraville – can seem, no doubt, near invisible.

Look a little harder, though, and it’s right there all around us.

So the opening of a trio of Greek eating establishments is not so much something new as a continuation of deep heritage.

We have no news about the schedule of the Brother Hood Yiros & Grill off Buckley Street.

We do know Eleni’s in Yarraville is, after a slow start, coming along nicely.

Progress views on what looks to be a spectacular fit-out have been available for the past week or so to passers-by on Anderson Street in Yarraville.

But it’s Meat The Greek in Seddon that is first cab off this particular rank.

We – CTS No.1, good mate Justin and his colleague Dayna – hit it on opening day, along with a good number of like-minded hungry and curious souls.

And a very nice lunch we have, too.

I feel obliged to record here the minor wrinkles we experienced.

But given the place had been open barely an hour, I also recommend taking no notice of them.

Indeed, Facebook reviews strongly indicate the Meat The Greek crew is already running right up to speed and doing fine.

The place is done out in simple, bright and cheerful cafe fashion.

The menu (see below) is just how we like it – succinct and listing very low prices.

… chicken for Dayna and …

These were very much in the Greek street food style, so are not really in your two-fisted, bulging-with-meat bag.

But the meat is fine, abetted by a handful of chips and good dressings and salady bits, all stuffed in that puffy-style pita.

They were good value for $9. 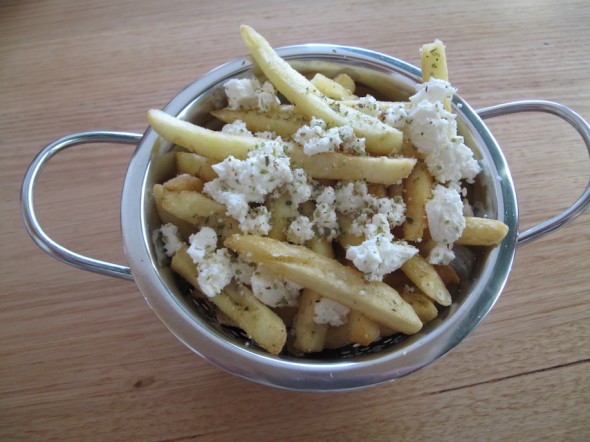 Are feta chips a new or an old thing?

We don’t know, but we reckon it’s a brilliant concept.

This was Dayna’s first experience with saganaki.

She found it salty.

But, of course, saganaki IS salty.

As well, by the time the last souvlaki had reached our table, a half hour had elapsed.

But – as noted above – we were happy to be opening-day forgiving given the quality of our lunch.

We’ll be back – and I know Bennie will love this place. 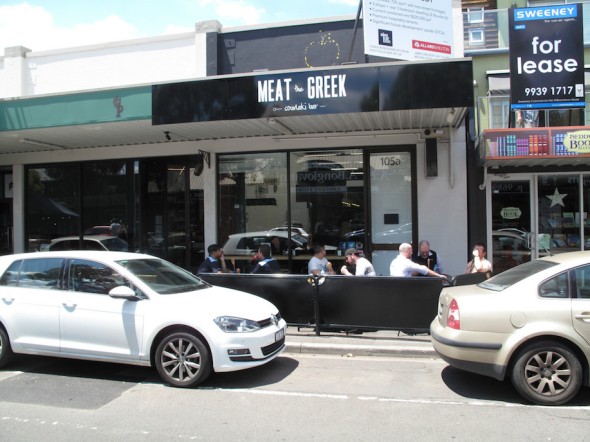