Consider The Sauce has been bemused in the past month or so by the doings of a newish western suburbs food business.

On the one hand, they’ve been talking up the outcome of a fancy photo shoot.

On the other, they’ve been serving – in my couple of experiences and likewise for some friends – food that bears not much resemblance to that pictured in those slick pics.

So I am interested to see how the Park Hotel goes in terms of replicating the fare depicted in glossy, beautiful photographs accompanying the media release heralding the joint’s new autumn menu – the one we have been invited to try (see full disclosure below).

More broadly, I am interested to see if the Park is actively helping to build Werribee’s foodie reputation.

A long-term tenant is being sought by Wyndham council for the Bridge Hotel, just up Watton Street apiece, promising a potentially snazzy venue to join various other outpourings of good food in these parts.

A hunch: Werribee could be a food star in coming years.

Oh boy, these are so good that when/if we next visit, I’ll be awfully tempted to persuade the staff to upgrade them to main course status.

The minced/chopped vegetables remain wonderfully al dente and the mayo has just the right amount of zing. 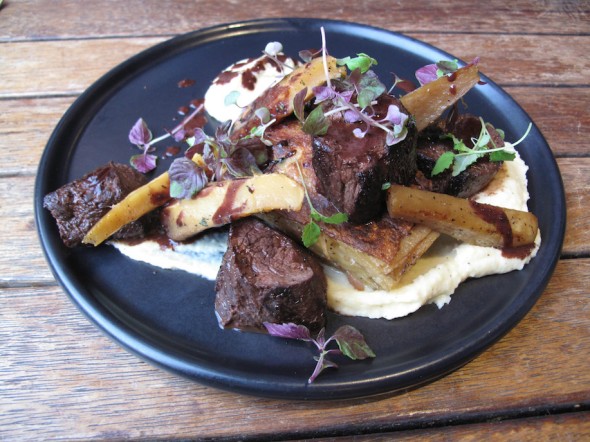 He likes it plenty, though it seems to me the meat could’ve been hotter than the lukewarm he’s received.

From the specials list comes my chargrilled atlantic salmon with garlic-wilted spinach, kipfler potato and a dill hollandaise ($28).

The fish is succulent, tender and tasty, despite apparently being more well-cooked than is often the case with this species.

The vegetables – as with those on Bennie’s plate – are perfectly OK, but seem more like regular pub food than the step-up in class I’ve been seeking.

And I’m regretting, a little, not having bought into the Wednesday night fried chicken offerings (see details below).

Bennie’s having none of that.

Proclaims he: “Dad, this is way better than normal pub food!”

OK, based on our desserts he’s on target.

“I’ve never tasted anything like this before,” says he of the sticky date panna cotta with butterscotch sauce, caramel popcorn and green apple gel ($12).

And he means that as a compliment!

The unusual flavours are winners in a fine sweet offering.

The custard tart with orange and blackberry compote with a toasted croissant ice-cream ($12) is almost as enjoyable.

But it does surprise.

We have been expecting something gooey and viscous – along the lines of a vanilla slice or creme caramel.

Instead the custard tart itself is quite solid – more like a slice.

(Consider The Sauce dined at the Park Hotel as guests of the management and we did not pay for our meal. We ordered whatever we wanted. Park management neither sought nor was granted any input, oversight or pre-publication access to his story.)