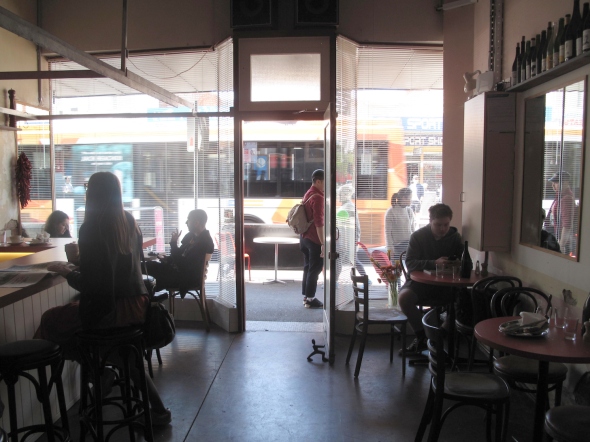 We’re quite the salt fiends here at Consider The Sauce HQ.

This is not a boast – it’s a simply statement of fact.

Something a bit “meh” about one of our many home-made soups or stews?

And, hardly a surprise, we eat out quite a lot so are well used to salty restaurant food.

So it IS a surprise to have too much salt be a problem for us at Roman’s Original – and not just concerning one dish, but both we order.

Bennie’s first comment, upon trying his fried chicken sandwich ($15) is: “Wow – this is like really flash KFC!”

Yeah right, I figure, suspecting he’s playing a bit too much the food critic.

But then he proceeds to pick the flour-based coating from his chook and enjoy the rest of his meal.

I try a couple of bits of the discarded coating.

I hope there’ll be no such problems with my fish sandwich ($16), featuring a good-size piece of ling.

My sandwich is dressed and prepared the same way, so far as I can tell, as Bennie’s chicken effort – some herby mayo, lettuce, an ineffectual cheese slice, pickles.

It’s a terrific meal, a real nice handful with the crispy fish a treat.

Yes, my fish coating – panko crumbs this time – is ALSO way too salty.

And, as above, for us that’s saying quite a lot.

What is going on here?

I’m told, when we’re finished our meal and paying up, that today there have been some new arrangements in the kitchen.

We feel assured this is a one-off happening.

And that makes us happy.

We love the whole vibe, from the way bits, pieces and walls from the old deli have been retained in this place’s minimal-yet-elegant fit-out right through to the funky music.

And we love that this bar/eatery fits right into Leeds Street in particular and Footscray central in general.

Just like that – sound of fingers snapping – it looks a part of the furniture.

And, naturally enough, we also dig the equally minimalist menu – there’s no printed versions; just this simple list parked on the wall behind the order/pay counter.

We get two servings from the dishes listed under “sides”.

The pickles consist mostly of al dente carrots rounds with a mildly sour yet very intriguing flavour. They’re a bargain at $2.

The potato salad is even more of a steal – the $7 serve is pretty damn big, so much so we don’t finish it.

Our salad is divine – a mayo-rich extravaganza that is perfect in every way.

Despite the salty hiccups, we are eager to return to Roman’s Original.