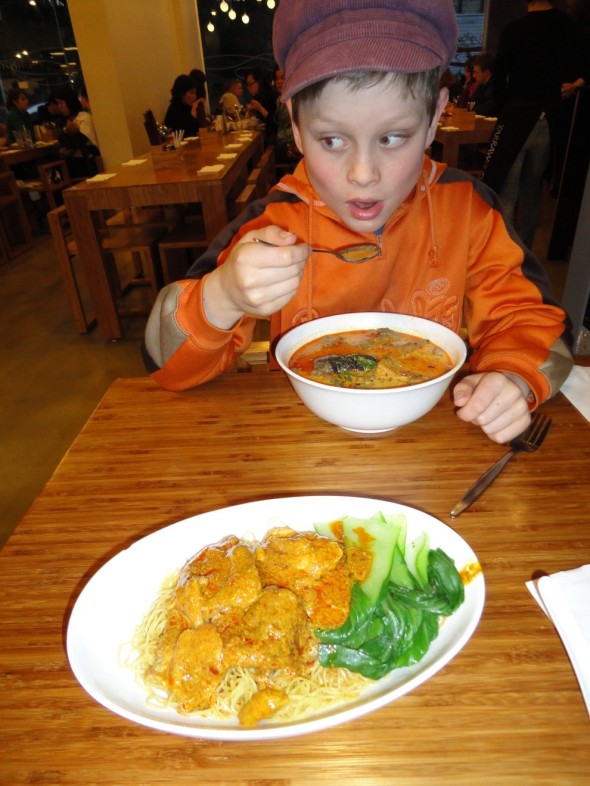 The old Laksa King was one of the places that spoke so eloquently of Melbourne food culture.

Not in terms of quality or high-falutin’ style or world renown.

Nope, its place was along the lines of Melbourne food personality – think Pellegrini’s, Stalactites, the bratwurst stall at Vic Market, the Waiters Restaurant and so on.

Unfortunately, Laksa King was also a dumpy old thing, drab and more than a little down at heel.

Moreover, we never ate there because – whatever it might have lacked in sparkle and swish – it was very popular, so whenever we were in the vicinity there always seemed to be a queue of six or more.

The contrast to the new Laksa King – around the corner, and adjacent the train station – could not be greater.

The new place is gorgeous!

It’s big and bright, packed with lovely wooden chairs and tables, and the many black T-shirted and on-the-ball staff scurry around on a polished cement floor while a you-beaut sign adorns the roof..

Given the substantial upgrade, it’s a pleasure to note that Laksa King has nevertheless kept its prices well within the cheap eats realm. Most single person dishes – ranging from Hainanese chicken rice to mee goreng – fall a tick or two either side of $10.

We’ve been twice in the past couple of weeks.

First up was a rather frantic Friday night, with waiting times for our main courses stretching out to about 15 minutes.

We got by in the meantime with a beaut lobak ($6.20), the crunchy bean curd skin encasing minced pork that also had a delightful crunch about it thanks to being studded with carrot and water chestnut. The achar (pickled vegetables, $5.20) was OK, but a little on the bland side.

We regretted our conservative choice of mains.

Bennie let his love of dumplings rule, and while his prawn dumpling noodles were fine – OK stock, OK dumplings, OK noodles – they seemed to lack a little zing.

My roasted chicken rice was lacklustre. The chook was dry, the rice passable, the soup OK and – worst of all – the chilli sauce tame and dull, while its expected partner of an oily ginger/green onion mix did not turn up at all.

Our return visit was made more agreeable by sticking to tried, true and a little more spicy, and by eschewing side dishes and soft drinks – keeping the price tag down to a very excellent $19.70.

The beef curry laksa ($9.20) was a brightly coloured bowl of more tender beef slices than we could eat and mild spiciness. Its highlight was a large and silky eggplant slice of magnificent flavour. I swear I’ll rue the day Bennie decides to dig eggplant!

The curry chicken noodles ($10.20) were also mildly spiced, with plentiful chicken and bok choy sitting on thin egg noodles that at first seemed as though they were going to require the attentions of a knife and fork, so enamoured were they of each other’s company. But there was plenty of gravy, which mixed with the noodles in a fine fashion to become a sort of Malaysian pasta dish.

Given the homely surrounds we mostly inhabit in pursuit of great cheap eats, it’s quite a thrill to send time in  a place that proudly boasts a bit of flash, a bit of a wow factor.

But the food, as we have thus far experienced it, leaves an impression of hedging its bets for the broadest possible reach in terms of customers. Of the four mains and two starters we had in two visits, only the lobak sparkled.

Nothing wrong with that – and the crowds vindicate such a policy. I’ll concede, too, we made rather conservative choices – but there’s not much further you can go on the menu.

But I can’t help but feel we’ll continue to find more fire and passion in the more humble likes of Vy Vy, around the corner on Racecourse Rd.

You can read more reviews of the new Laksa King at Jeroxie and Saint-ism.

Laksa King has been reviewed by The Age. 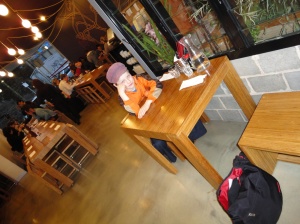