Put aside bias against shopping centres and malls in the eternal search for foodiness.

Because outside our truly inner west haunts such as Yarraville, Footscray and Flemington, where there are older neighbourhoods suitable for hosting food enclaves, there ARE no older areas to play that role.

In places such as Point Cook or, say, Caroline Springs, food outlets have to go somewhere and it seems the only place they can go is the local shopping centre.

(Alfrieda St and surrounds in St Albans seems to be a notable exception to this truism.)

That’s what I’ve been telling myself for the past couple of years.

But the simple fact is it’s been more a theory than something I’ve found to be true in adventures that have taken Team Consider The Sauce across wide swathes of the inner and outer west.

But at Sanctuary Lakes Shopping Centre I find, to my delight, vindication for my theory.

Not only do I find the target of today’s outing, a swish, newish Japanese joint called Charcoal Fusion, but also – nearby – not one, but two Malaysian places.

It’s not – it IS a full-range Japanese restaurant with skewers at night (that’s where the “Charcoal” bit comes in) and teppanyaki.

But today I’ll be enjoying the much more homely and smaller lunch list that has various don/rice dishes and noodles such as yakisoba (list below).

In a bid to drum up some lunchtime trade, these are being offered at $8 instead of the listed $12.

On the basis of my lovely lunch, I reckon this is a red-hot bargain. 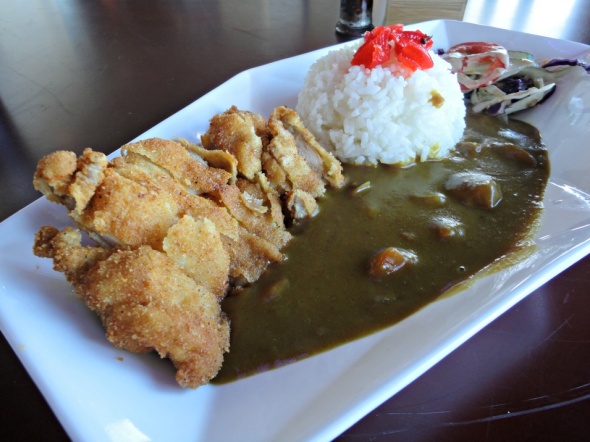 The lovely and welcoming manager/owner, long-time Point Cook resident Jenny, started her new venture inspired by the lack of eating-out options in the area.

She agrees business people such as herself have little option when it comes to location in such an area.

And with this territory comes myriad challenges and restrictions – Jenny, for instance, must adhere to the general opening hours for the centre as a whole.

Miso soup is not listed but my request for it is cheerfully and agreeably met.

It’s super, especially at $2 – quite dark, deep of flavour and hiding a good amount of seaweed and tofu in its depths.

The curry is a deep khaki, sticky and studded with tender potato pieces. It’s a classic curry, Japanese-style, with a chilli hit that manages to be both low-key and pleasingly intense.

The crispy chicken is rather profoundly uncrispy. But it is also unoily, delicate, freshly cooked and delicious.

The salad bits are dressed with a sesame concoction. I discard two rather tired slices of cucumber and find the rest go real swell mixed in with the spuds in the curry gravy.

The accompanying mound of rice is topped with pickled ginger that is red rather than usual pink, and nicely chewy instead of outright crisp.

I love a bargain lunch – and even at the full whack of $12 this would fully qualify.