Despite our many years in the neighbourhood, Sun Mei has never tempted us.

On the rare occasions we indulge in the Chinese delivered route, we go with a more distant but significantly cheaper outlet.

We keep on motoring to Footscray central or further afield.

Or if we stop in Seddon, there are other more alluring options – especially in more recent times.

But about a year, Sun Mei got a new look, some paint and quite a different vibe, with white-coated cooks energetically presiding over the woks in theatrical style every time we pass by at night-time.

So it is that I finally succumb to curiosity.

And discover, in the process, that Sun Mei remains fundamentally a take-away joint, despite the makeover.

But I agree with Consider The Sauce buddy James’ comment that with a little effort it could be so much more, as the food is “above-average” for its kind.

It’s very busy, even this early in the week. Locals are popping in with regularity, while the in-house delivery drivers comes and goes several times while I am in the house.

Eat-in facilities are minimal – a long wall shelf with stools opposite the wonderfully open kitchen and servery, and a small table in the window, at which I perch.

Two dim sims ($2.80 on the takeaway menu) are rather unglamourosuly served to me in a plastic takeaway container.

Forget the legendary and over-rated South Melbourne Market dimmies – these here are the biz! 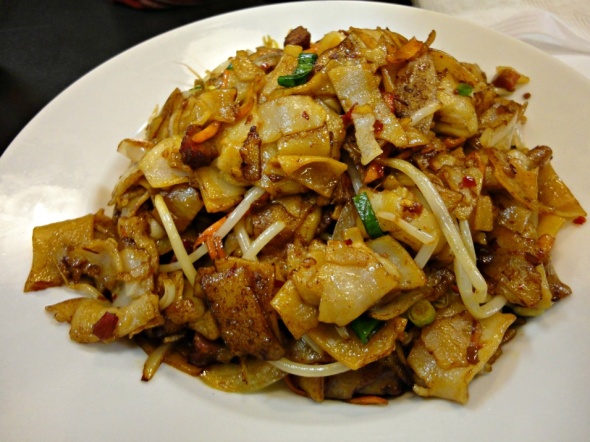 As could be expected, my kueh teow ($13) is significantly different from what would be served in a Malaysian restaurant.

The rather finely chopped pork and tiny shrimp come almost certainly from the same ingredient containers that are used in producing Sun Mei’s fried rice.