This pub was once our very local local.

That was two moves ago and several years before the advent of Consider The Sauce.

We only ate there once, but yours truly spent time there – much time, actually – watching various football games in the days before a subscription to Foxtel made such unnecessary.

We no longer live so close, but we’re interested in checking out how it shapes up under “new management” – not that that is always, if ever, a particularly hopeful sign.

Inside, all remains much as we recall.

The new crew seems to come straight from the same template as the previous and the kitchen staff are wearing Jack Daniels polo shirts.

I even get called “Darl” when ordering.

The menu is very much your basic pub grub – steaks, some pasta, kids meals with chips for $10, a daily specials blackboard.

Bennie’s dinner desire is not featured on the menu, so he settles for chicken schnitzel ($17).

The schnitzel itself looks rather ghastly – almost diseased, actually.

But that’s because the cheese is far more grilled than is usually the case.

The certainly brings out the cheesy factor, and Bennie’s meal tastes good to his dad.

And while I’m no expert and could be fooled in this regard, I’m pretty certain this is your actual slab of actual chook meat, as opposed to the re-constituted variety.

The chips and salad are OK, but the former seem to adhere to the dictates of a lack of generosity we seem to be coming across more and more lately in similar meals in similar places.

Health-wise, that may actually be a good thing, but still …

My bangers and mash ($13 regular price, $10 for me as a blackboard special) looks unglamourous and drab.

But in the eating it is much better.

The snags appear cheap and nasty but are just the kind of tightly-bound Italian-style pork sausages we eat at home.

The mash is hot and plentiful; the gravy is dark and just the right kind of salty.

Both are classic cheap pub grub.

Having ordered this exact same meal in any number of places and received nothing BUT bangers and mash, I am pleased to see and eat the carrot and zucchini on the side.

There’s a big bunch of room in our lives for pubs and pub food that have none of the swishness of the Spottisswoode Hotel, Plough Hotel or Junction Beer Hall & Wine Room.

The Vic seems to be doing a fair job.

And certainly, the fact there’s a heap of locals lining up early in the week for a feed speaks well of the place.

But for similar food presented with a tad more panache, at similar prices and marginally closer to home, we’ll most likely stick with the Mona Castle.

As we depart, Bennie asks with puzzlement: “What kind of pub doesn’t have a burger?” 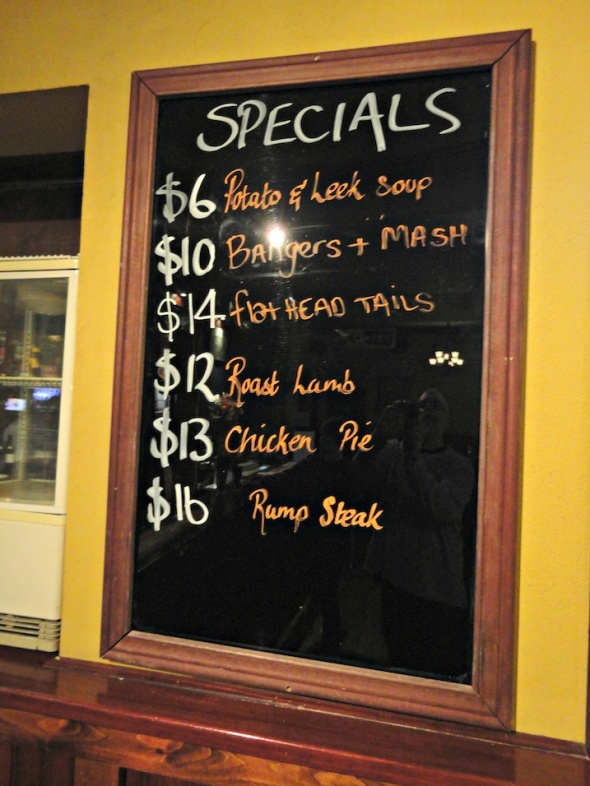 5 thoughts on “Back to our former local”