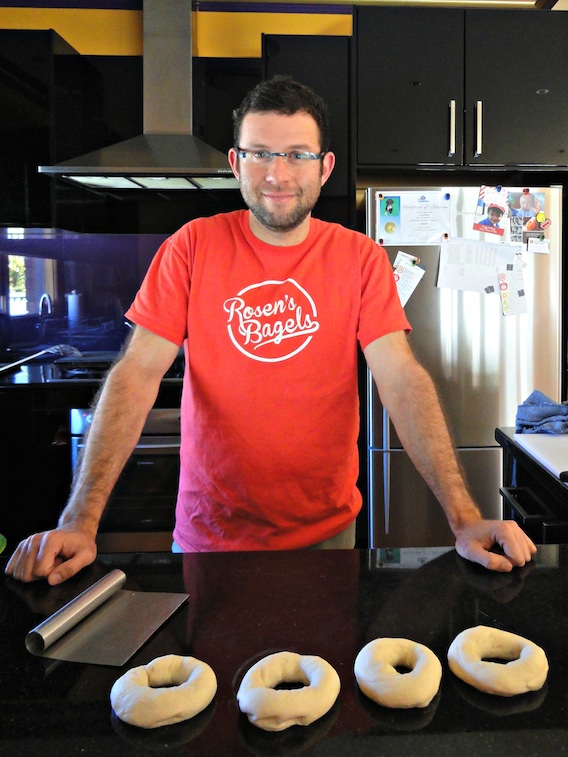 Say bagels, and most people would do as we do and think of, say, New York or Philadelphia or Europe.

Yet while Michael Rosen originally hails from Los Angeles, bagels are a big part of his Jewish heritage.

As he says simply on his website: “I grew up eating bagels.”

For many years making his own had been a hobby.

But when he moved to Melbourne with his Australian wife a couple of years back, and settled in Caroline Springs, his bagel-making took on more of a cultural imperative.

There are bagels available in Melbourne, but as far as either of us are aware, none at all in the city’s greater west … save for those being generated by Michael’s new business.

“I wanted good bagels near me,” he says.

As well, he was coming into regular contact with a variety of US expats, Jewish and otherwise, who were likewise feeling profound bagel deficit.

It took him the best part of a year to get into the righteous swing of bagel-making in a new country – there has been much testing and experimenting to learn how to produce an excellent bagel using different water, flour and oven.

His regular gig is in the IT industry, and of necessity that can and will remain the case for the time being – he’s in no great hurry to go the full bagel.

But he is having a ball, all the while treating his bagel business in a smart and professional manner.

Putting his bagels on a more professional footing is bringing its own challenges.

He has forged a working relationship with his local Caroline Springs bakery, Let’s A Loaf, so has had to get to grips with working with more dough and much grander cooking facilities.

Bennie and I love hanging with him for a while in his Caroline Springs home as he talks bagels and bakes us up a superb batch.

Michael uses nothing but organic flour.

Michael shows us how he breaks the dough mound into smaller, weighed segments and then deftly hand-rolls them into fat strands before – hey presto! – joining the ends.

Looks easy, no doubt takes many hours of practice!

It’s this hand-rolling that helps make Michael’s bagels even more magical – each is an individual with its own irregularities.

The bagels Michael will bake for us today, however, have been “maturing” in the fridge overnight.

In small batches they are boiled for about a minute in water to which about a tablespoon full of barley malt syrup has been added.

From there, the bagels are left plain or dunked in poppy or seasame seeds, or a mixture of both with granulated garlic and onion.

Then they’re baked for about 20 minutes.

Demonstrating bagel versatility, we enjoy the bagel “pizzas” Michael has made for us as a late lunch snack, but we buy some cream cheese and smoked salmon on the way home for a more traditional and lovely bagel dinner.

It makes us very happy that such an earthy, life-enhancing and ancient tradition is being continued right here in our west.

They include a mix of joints that sell bagels unadorned and cafes/eateries that are selling the bagels as prepared sandwiches of various kinds,

In the west, they include Scudela, Pepper Cafe and Wee Jeanie.

Michael is also making and selling cream cheese-based “schmears” to enjoy with his bagels – they come in plain, green onion and dill, and smoked salmon and chive flavours.

Michael will be at Williamstown Farmers Market, at Robertson Reserve, corner Cole and Hanmer streets, Williamstown, next Sunday (October 27) from 9am-1pm.

5 thoughts on “Bagels – the hole story in Caroline Springs”