The stretch of Barkly Street up towards Victoria Street remains unreconstructed Footscray and is not, it appears, perceived in any way as a food precinct.

Yet while the area is changing in terms of apartments and the like, it already teems with eating activity.

The options range from the new-look Plough Hotel and a couple of famous old-school Chinese places to Lentil As Anything, a growing number of African establishments, a (mostly) late-night pizza joint, a Nanado’s and a pair of cafes.

Chris, the “C” of CK – the other letter is a bloke named Ken – tells us he’s even heard the short-lived Italian buffet-style place across the road from his new cafe is scheduled for a fresh incarnation.

It could be that the guys’ cafe and chippery may find a handy niche for itself in this mixed environment.

As Chris points out, the area is a lot more residential than it appears from street level.

What they’re offering is a nothing-fancy range of fast-food.

In terms of fish and chips, it would be unfair to compare with the polish of, say, Ebi – but being situated between that Essex Street place and the new food-to-eat-right-away outing at Conway’s, and offering an alternative to what’s around in their immediate vicinity, may do them right.

Certainly we have only the most minor of quibbles regarding a two-man meal that costs us only small change over $15.

(Conway’s, BTW, is where CK’s is sourcing their fish …)

My blue grenadier ($5) looks a little lonely presented alone but tastes fine. The batter is relatively ungreasy but does come away from the fish.

Bennie’s burger with the lot ($6.50) appears rather unimpressive when first brought to table, but the boy likes it a lot – as you can see from the photograph, the patty is significantly more beefy than is often found in such places and at such prices.

As he says, it ain’t the Grill’d of which he’s so fond, but it IS less than half the price.

The chips ($3) are the standout of our meal – lots of ’em, hot, crisp, perfectly cooked.

We’ve even been given a choice of regular or chicken salt.

Chris charges us $2 rather than the listed $3.50 for the coleslaw he’s quickly whipped up for us on account of he thinks it’s rather on the mean side size-wise.

I carelessly neglect to take a picture of it, but it impresses – freshly made cabbage and carrot with just the right, restrained amount of commercial mayo.

Meaning it’s a little on the sticky side – as opposed to the mayo/cabbage soup we are often served elsewhere! 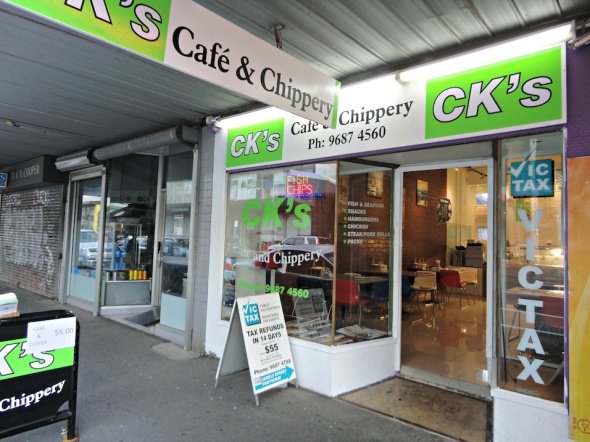