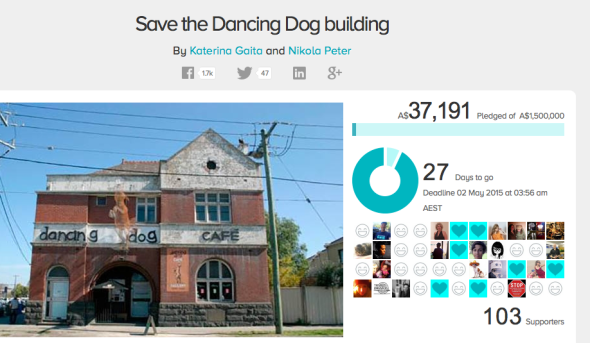 By early evening, it had accrued just over $1000 in pledges.

How did that happen?

Easter has slowed things down, unsurprisingly.

But as of this writing – early evening on Easter Sunday – the pledge amount stand at more than $37,000.

Maybe we can really do this!

In the meantime, the campaign’s Facebook page has been filled with enthusiasm and all sorts of exciting and inspiring link and stories.

Even to the most ardent optimist, however, it may still seem like a preposterous long shot.

So is there a point to all this if we fail to reach the required amount?

Oh yes there is!

As Katerina said in an email gee-up to supporters:

“Already, these meetings have brought people together and brought out all sorts of wonderful stories. Even if the campaign doesn’t win, it’s been worth it just for these moments. Come and enjoy the inspirational community spirit. And remember, even if we don’t get the money we need to buy the building, the better this campaign does, the more we are putting developers on notice that they will have a fight on their hands if they do anything really inappropriate.”

Personally, I am already enjoying the community goodwill and spirit being displayed by all and sundry.

And given the networks of connections and relationships that are being utilised, it’s unsurprising that some things are becoming nicely personal.

The best friend of my son, Bennie, is a lovely lad named Che.

When they first became pals, they were both attending the same Sunshine primary school and Che lived with his mum, Viki, and sister, Chela, in North Sunshine.

A few years back, they moved to Yarraville – and just a few blocks from us.

The boys’ friendship has deepened since then and yours truly is slowly, bit by bit, getting to know his mum and the family in general.

One thing I have learned through conversation and Facebook is that Viki is a really, really good singer.

What I did not know until #letsbuythedog is that she has a rich and intense history with the Dancing Dog.

Here’s what she posted for the Let’s Buys The Dancing Dog Facebook group:

“I love this place – I’ve spent many a Sunday afternoon here with the Westword poets. My kids love the cookies they serve. Our band has played gigs there and we made one of our video clips there. I hope this place can remain as a space where people make music/poetry/art/socialise as before. I don’t know if this helps in any way, but here’s a video clip we did, much of which was filmed at the Dancing Dog, the fact of which epitomises what it means to me and many others. The people at the Dancing Dog were very supportive when we made this.”

And here, just as a matter of record, is the Biggin & Scott video spruiking the building:

Remember: The auction is scheduled for Saturday, April 18, at 1pm!

One thought on “Dancing Dog Diary No.2”