Meeting No.3 and the second of which I have attended.

The Pozible campaign – link above – is tootling along but it seems clearer than ever we’ll not be reaching our target unless unless philanthropy of some sort comes into play.

But everyone is united that this project is worthwhile no matter what for a variety of reasons.

Other group beliefs are re-iterated:

The is a not-for-profit community group.

It is NOT anti-development.

It IS about retaining the Dancing Dog building as a community asset and space.

Many, many ideas and suggestions are discussed.

They include allies, a plan B, a heritage listing with more clout than the current one, promotions, media, an “angel developer”, and what to do on auction day.

But time is running out, so we must stick to the, um, “pozible”. 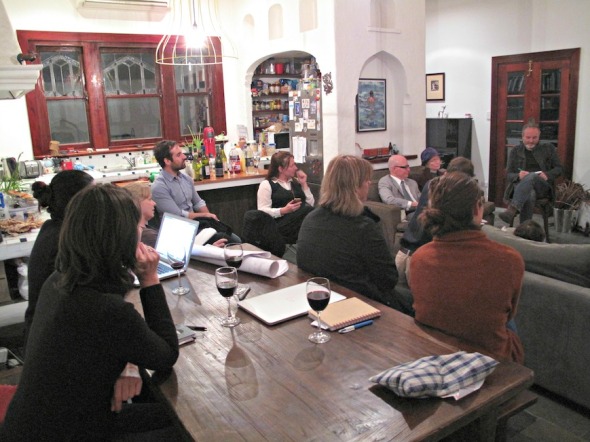 Our plan of attack – to spread the campaign as widely as possible online and offline.

You never know what could happen.

Or we might just scare off developers who have no regard for what we love about the building and encourage those who are keen to do something community minded and inspired.

What we do know, is the more support we can show for this campaign, the more likelihood there is of a good outcome of some sort.

One thing that struck as I drove to Seddon for meeting …

If the building should fall into the hands of developer with no sympathy for widespread community regard for the building, the result could be not just townhouses/apartments the likes of which have been built in the surrounding neighbourhoods.

It could be worse as the site is so prominent, standing as it does on a corner.

And as it is what greets motorists and pedestrians when they enter the Foostcray CBD from the Albert Street overpass, it could even be argued that the building is something of a gateway to Footscray.

Not, perhaps, to the same degree as Footscray Road or Dynon Road/Hopkins Street river bridges … but still.