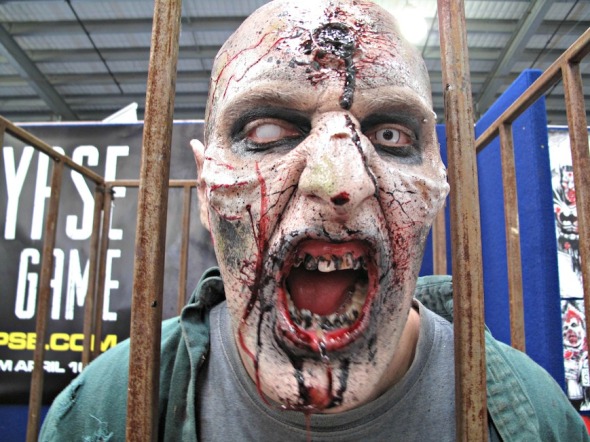 Supanova is a celebration of pop culture, and – more specifically – all things comic, scifi, fantasy, gaming and more.

Bennie and I attended in 2009 and had a fine time.

Back then we did some planning, taking banh mi and a big bottle of Coke.

This time around, it’s an impromptu day and we suffer for that.

For starters, while Bennie reckons the entrance fee is $30 it’s actually $40 on the day.

As well, it seems Supanova has grown A LOT in the intervening years.

Even after nearing the showgrounds, it’s takes almost a full hour to secure a parking spot.

Then it takes more than half an hour to work our way to the front of a ticket queue that stretches for about 400 metres.

Of course, we can’t blue about this too much as we could depart at any point – no one is forcing us to endure this bullshit.

But, heck, we could’ve just about walked from Yarraville and gotten in quicker.

There must be a better way – especially for an event that costs so much to enter, only for patrons to be greeted by more queues – for food, autographs and photo ops – and many, many more ways to spend more money. 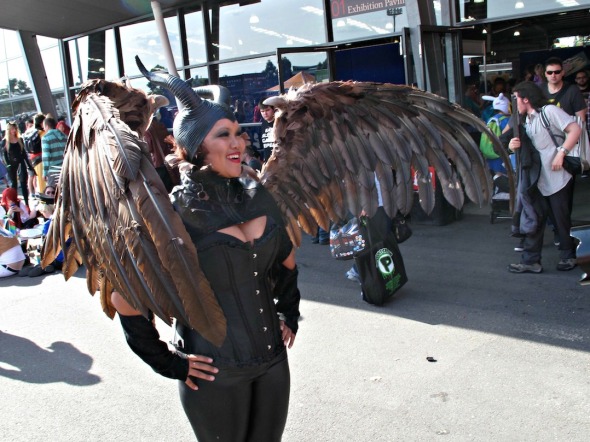 Anyway, we persevere and get there in the end – but by then I’m plenty cranky and exasperated.

Instead of standing in line for any of the in-house offerings, we don our wrist bands and head around the corner to Zigzag Burgers ‘n’ Salads.

Since our initial visit here, I’ve been back once by myself and am very happy to return once more.

Our burgers are excellent and the hand-cut chips are better than before.

Zigzag is now our official go-to burger joint – yep, above and before 8bit, food trucks and any place else you care to mention.

The main hall has many hundreds of stalls and I’m thrilled.

Unlike Bennie, I’m not really into to comics and gaming but I find plenty to keep me entertained.

For starters, I’m delighted to see more books than I recall from our previous Supanova outing.

I’m supa happy to meet Justin Woolley, buy his book, a rather darkish fantasy/speculative fiction outing called A Town Called Dust, and get it autographed.

I have a longish and fascinating chat with Justin about book blogs, their role in book promotion and the inevitable spectre of corruption that can arise.

A little further on, I buy another book by another Melbourne author, get it autographed and enjoy talking with its author.

Steve P Vincent‘s Foundation is a ripping political conspiracy thriller – I’m up to page 100 and loving every word of it.

Steve is an Ascot Vale local and is fully familiar with the fantastic food of Safari.

How cool is that?

Bennie, meanwhile, has bought some vintage comics and is eager to get a poster by Tony Moore, who was responsible for the artwork on the first six issues of The Walking Dead, which my lad only recently inhaled.

He gets his poster, has it signed and has a pic taken with the artist.

This ease of access to Supanova guests – buy the product and get a chat, an autograph, a photo at no extra cost – is a vivid contrast to the cavernous hall in which the event’s superstars (none of which I’ve heard) do their thing.

Here punters are herded like cattle, wait times seem very long and the prices for autographs and photos averages around the $50 mark.

Back in the main stall hall, I am happy to take in some sports activity to fill in for the fact I’m missing out on my usual Saturday arvo soccer and/or league.

After several hours, Bennie and I are getting leg weary.

We’re almost done but it’s still a gas to wander around checking out our fellow punters and the extreme efforts so many of them have made to get into the spirit of things. 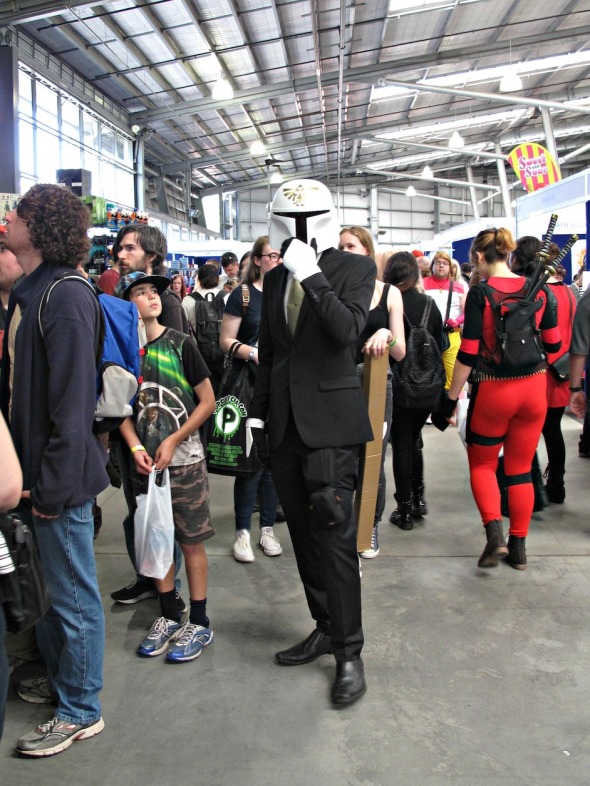 Supanova may not press my music and food buttons but to a large degree, I realise, these are my people.