In the end, it happened suddenly and by accident.

Bennie and I were doing routine housework on Saturday, when I heard a despairing cry …

And what a very excellent thing that has turned out to be.

Look, we tried really, really hard to adhere to the advice given by cat-lovin’ friends and readers – that keeping Boris inside was all for the best for various reasons.

But as the ramifications of his new lifestyle become apparent, it is clear the full-time indoor life was never going to be sustainable for this particular cat in this particular (small) house.

Within 24 hours of his “escape”, all ours lives had been transformed. 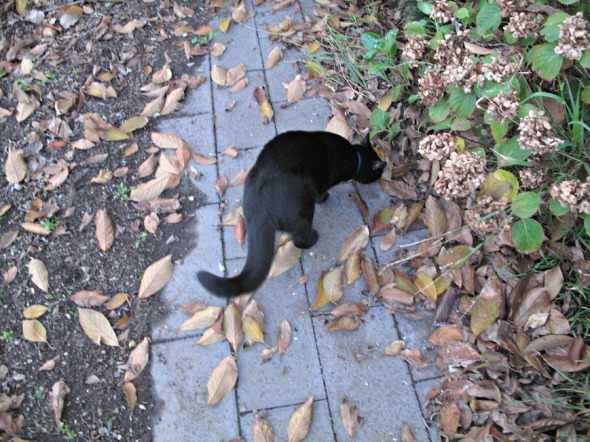 Bennie and I have not been scratched or bitten since.

We no longer have to worry about powers cords and other electrical leads being rendered useless.

Maybe we can unfurl the blinds and drapes, as they no longer appear under threat of terminal shredding.

My paperwork is no longer being turned into confetti and maybe we can remove the layers of foam rubber from beneath the couch.

The several months it took us to get to this point since his arrival appear, however, to be serving us well.

Boris knows where home is, who are his humans and where the food is at.

He appears to mostly be respecting the four fence lines of our property.

But he is happy and very stimulated.

He’s coming running when hailed, even if that means taking some time out from his Very Important tree-climbing crusade.

He is being a little on the aloof side, at least for the time being – coming inside every couple of hours to make sure everything is as should be.

His face is frequently adorned with spiderwebs and other crap from under the house.

And he has made a start on getting to know – and reach some sort of accommodation with – the numerous local cats.

When I awoke on Monday morning, there was no sign of him.

But he was waiting on the veranda when I got home from work.