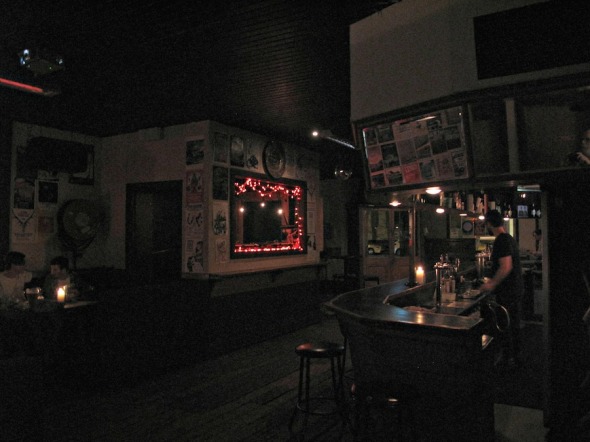 Driving to Carlton for an impromptu feed, Bennie and I talk about our barbecue adventures.

We love the food genre but generally tend to get gleefully lost among the many other offerings in the west, some of which often have elements that are barbecue of a sort by nationalities other than American.

Nevertheless, over the past year or so – and without having agenda to do so – we’ve knocked off, and overwhelmingly enjoyed, many of Melbourne’s BBQ hot spots.

Tonight it’s our turn at Bluebonnet Barbecue, which is operating out of Carlton’s John Curtain pub on account of fire damage to the BBQ business’ Collingwood digs. 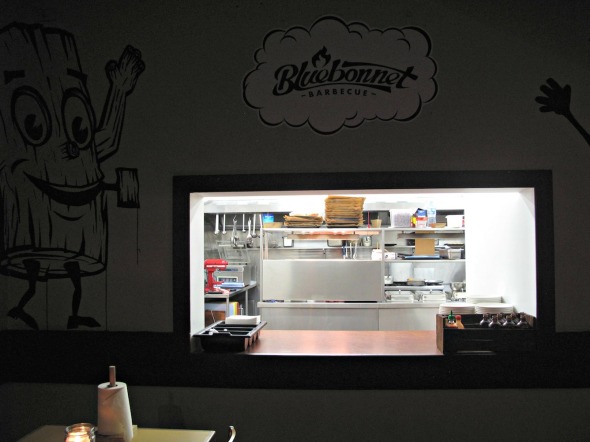 The trade union history of the pub seems to have been wholly overtaken by inner-city hipster grungedom in the form of posters spruiking upstairs gigs, gloom, old floorboards and carpet that is metaphorically sticky even if it isn’t physically so.

We grab a seat near the kitchen – we’re super impressed that there’s a paper towel roll on each table!

We splurge a bit, eat well but don’t push it to gluttony levels.

We find the pricing and food quality akin to several of the other Melbourne BBQ places we’ve tried.

In another words, it’s a darn good feed. 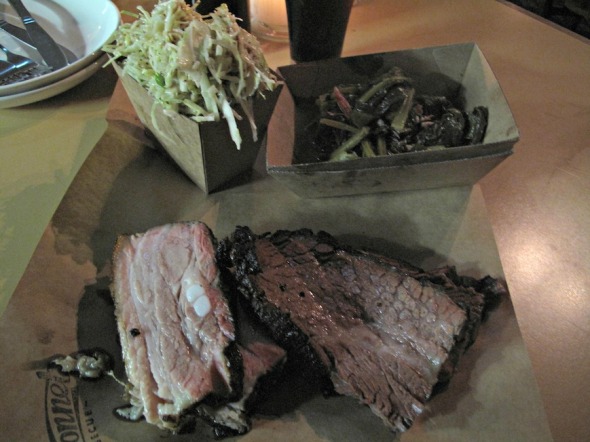 Pork baby back ribs (200 grams, $19) and Riverina black angus brisket (200 grams, $22) are both quite fatty but very well cooked and delicious with great flavour.

Our order provides us both a hefty slab of each of the meats.

We ignore the hot sauces on hand and make happy with judicious dabbings of the very good house BBQ sauce.

If anything, though, it’s the sides that are the real stars of our meal.

Too often we’ve found the obligatory slaw at Melbourne’s BBQ places too tricky and trying way too hard.

The Bluebonnet slaw ($8) does wonderful by keeping it simple.

In fact, the mustard seeds in the dressing aside, this could almost pass for the sort of east European cabbage salad served at places such as this one.

Greens in the southern style ($6) – cooked down with chunks of ham hock – are just as fine and have lip-smacking flavour.

We love the fact we’ve been able to have an effortless in-and-out feed here – BBQ should be so casual.

We even got a park right outside the pub!

Check out the Bluebonnet Barbecue website, including menu, here.