Consider The Sauce is enjoying a splendid year – but it’s not one that is turning out as expected. At its start, I envisaged much activity of the CTS Feast variety. To date, however, there has been a single Feast event. Attempts to get others up and running have failed to come to fruition. I’m OK with that – if such things are not to be, pushing harder doesn’t seem to help. In the meantime, Bennie and I – with help from a variety of very fine foodie pals – have simply continued to explore the western suburbs with glee. That relaxed approach seems to engender it own rewards in terms of interesting approaches that lob into the CTS email inbox. One such a few months back came from Moonee Valley Council – regarding a project in which CTS is very happy to have become involved. So … this post is the first of six that will appear in the next half-year or so sponsored by Moonee Valley Council. Long-time readers will know by now – and new readers can be assured – that our participation has only been made possible by being free to choose freely the six eateries to be written about and by having complete freedom to say whatever we please, good or bad. In other words … it’s business as usual here at CTS.

The stretch of Mount Alexander Road heading uphill to Puckle Street in Moonee Ponds can come across as a closed shop by day.

By night, by contrast and strictly thinking of food, it becomes a good deal more appealing.

As Bennie and I wander down one side of the road and up the other, we ponder quite a nice range of restaurants and cuisines before ending up pretty much where we started, thence to enter Tobagi BBQ, a Korean joint we’ve had on our “to do” list for a long time.

We end up being ever so happy we step through the Tobagi door, as we enjoy good Korean food of a homespun sort we’ve not come across before, cooked and served with panache.

The place is rather plain, if you look closely, but the clever use of many browns creates a warm and inviting atmosphere.

At first, on a mid-week night, we’re the only customers so enjoy the exclusive and friendly attention of both Elle and Jiweon, while the latter’s dad, Gerry, is in the kitchen.

The dumplings are OK, with mushy fillings that are very garlicky, but the serve size seems on the parsimonious side. 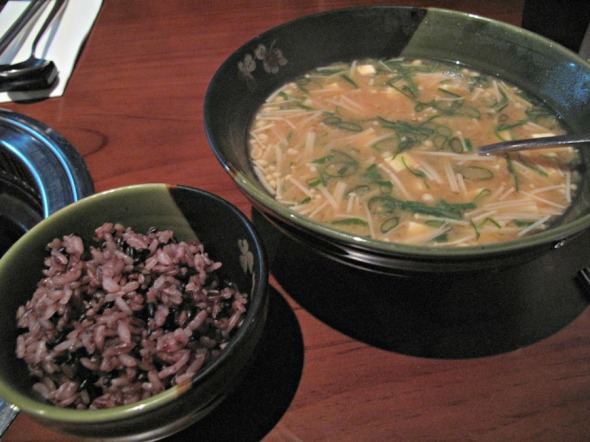 The arrival of “denjang soup” ($10) is much reassuring.

A big, very fine bowl of basic miso soup is studded with heaps of tofu and enoki mushrooms.

There’s plenty enough for Bennie and I to share, though as with our mains the mix of white/black rise seems superfluous to our mutual mindset and appetite.

Even if such grains are the Korean way …

I have friends for whom the idea of paying for kimchi is anathema.

Me, I’ve got no problem with it in an Australian setting, particularly when $4 gets us this lovely, generous bowl of fresh, zingy and only-lightly-pickled cucumber.

Then it’s on to our mains – for which we throw caution, both food and financial, to the wind by going big on meat with beef bulgogi ($25), of thinly sliced and marinated beef with enoki mushies, and pork galbi ($29), of free-range pork ribs marinated in chilli paste and sesame oil.

To go with our mains, we are provided with three sauces – sesame oil/salt, miso paste and chilli paste, along with lettuce leaves and two serve of the same rice ($3 each).

It’s at this point in our evening that Jiweon really comes into her own by deftly barbecuing our meats at our table. 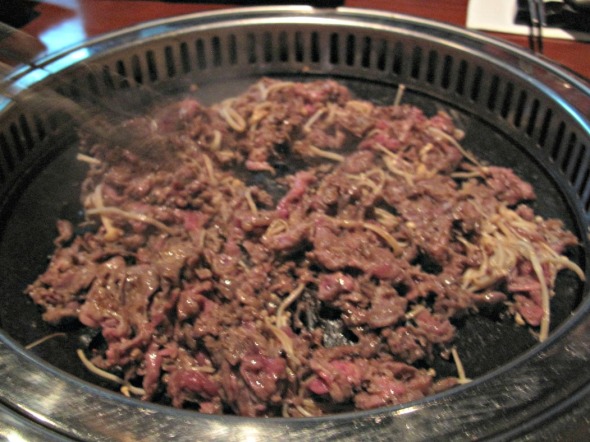 We start in on the beef and enokis at the medium-rare stage – and it tastes very, very nice, with great texture and BBQ flavour.

We eat some with the nearby sauces.

We eat some rolled up in the butter lettuce leaves, as instructed.

We eat some just making it up as we go. 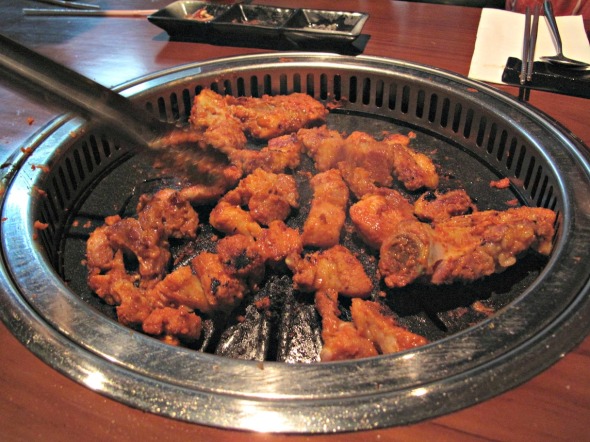 The pork proves even more demanding of Jiweon’s time.

She barbecues the big, handsome chunk of meat whole for a while before cutting the meat from the bones with scissors and continuing the cooking.

In the end, we are left with heaps of smaller chunks each and a nice, meaty bone to gnaw on at the end.

The meat is an interesting contrast to all the US-style barbecue we’ve indulged in this year.

Here, the pork rib meat is quite chewy, very tasty and not as spicy as seems might be the case.

We’ve had a beaut meal and love the people here.

It’s a meal, though, that has stretched the definition of “cheap eats”.

But we’re happy with the quality and quantity of what we’ve been served. We reckon it’s all been good value for money.

Truth is, we could’ve got away with paying less by the simple, prudent moves of not ordering rice we didn’t need and two cans of soft drink where water would do!

Maybe a hotpot for us next time …

(This post has been sponsored by Moonee Valley Council.)