Truth is, since departing the Geelong Advertiser, Consider The Sauce has been in that city just once – on the way to and from a nice winery lunch.

Since then that city has been pretty much out of sight and out of mind.

Oddly enough, places that were whizzed by countless commuting times – such as Werribee – have since become the locations of numerous CTS visitations.

But … as it happens, one of our cherished and now regular dining companions and her other half have Geelong ties, and are only too happy to make up a table when an invitation arrives from Customs House (see full disclosure below).

And – again, as it happens – both my friends happen to be in Geelong on the day/night in question.

So I make the journey happily alone, eschewing the temptation of firing up the chopper and departing plenty early instead by car.

The traffic is heavy but flowing steadily, and I enjoy a nice drive fuelled by Haiatian rhythms.

I arrive with about an hour to spare before dinner time, which allows me to indulge in casual stroll around the CBD and waterfront.

There’s some sad-looking boarded-up shops on the main drag but elsewhere – on Malop Street and the waterfront – there’s been some attractive and cool eats additions so I bide my time menu grazing.

The first surprises, for me, are both the location and the building itself – for some reason I had in my mind’s eye that Customs House was another historic building, one closer to the train station.

This actual Customs House is almost on the waterfront and very striking at night with it expanse of lawn leading down to the bay.

Inside, the low ceiling lends the place a clubbish feel and whole feels very nice and welcoming.

For all the swishness of the surroundings, the vibe is casual and friendly.

Another surprise is the menu (see below).

For some inexplicable reason all three of us had been expecting bistro or “modern Australian” – what we find is classic, straight-up Italian.

And the just fine by us as we’re all partial to just that!

Everything we have is good or better – even, in the cases of one of our mains and a couple of the desserts, ranging into outstanding territory.

It all compares very favourably with the fare of any of the several western suburbs Italian places we like.

Fresh asparagus spears wrapped and grilled in proscuitto, served with a lemon mascarpone ($16) finds us each tucking into a lovely bundle, with the pig salty and chewy and the mascarpone a delicious touch. 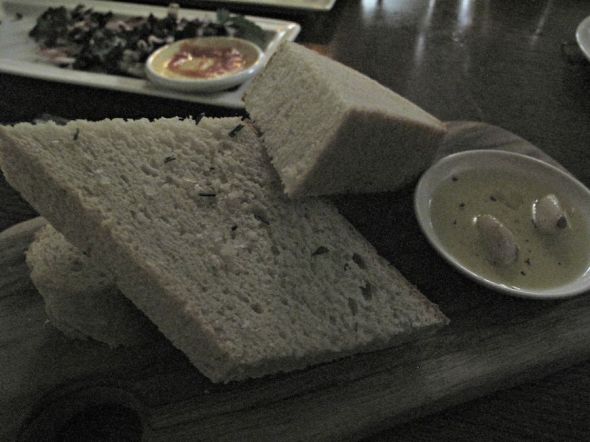 Focaccia with roasted garlic oil and rosemary salt ($8) is agreeably on the dry side, crumbly and enjoyable. We mop up the last of the rice ball napoli sauce with it, as well. 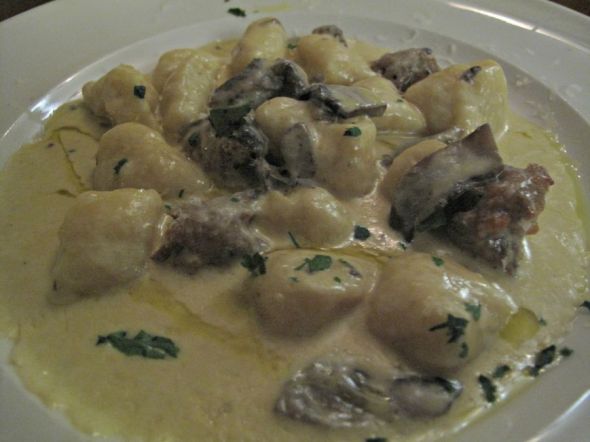 House gnocchi with parmesan cream, pork and fennel sausage and mushrooms ($34) appears to be almost overly rich but is enjoyed by its recipient.

My zuppa de pesce ($42) boasts a broth that is rich, deep and flavoursome with seafood stock.

The seafood is good, though the mussels are tiny and the whole is weighted heavily towards baby octopus – no matter, I scoff the lot with glee.

The simple, rustic pollo alla cacciatora ($38) is big hit, its hefty chook chunk tender, juicy and oh-so-fine despite the depth of the meat.

I try it, thanks to my companion.

I wish it was mine.

Now it’s on to desserts – we’re excited as the three featured are faves all round.

Chocolate panna cotta with hazelnut praline ($16) is fine and enjoyable but the least of our three sweeties.

… the white chocolate creme brulee with blueberries ($16.50) that our lovely evening ends with giddy highs that have us sighing with pleasure.

This is Italian dessert making of a very high order!

With that it’s back up the road for me, a familiar drive to the strains of Benin Afro-funk made all the easier and even enjoyable thanks to a fine meal enjoyed with good friends.

(Consider The Sauce dined at Customs House as guests of the management and we did not pay for our meal. We chose from regular menu and had no restrictions placed upon us in doing so. Customs House management neither sought nor was granted any input, oversight or pre-publication access to his story.)

2 thoughts on “Classic Italian, well worth a drive”